Watched Jafar Panahi's 'The Circle'. It was made in 2000 and won accolades and awards for its portrayal of the challenges faced by women in Iran. The movie has been banned in Iran though. Jafar Panahi is also behind bars right now for 'unspecified charges'. I am however a great fan of his work and have seen 'The Mirror', 'The White Balloon' and now 'The Circle' and loved each one of them. 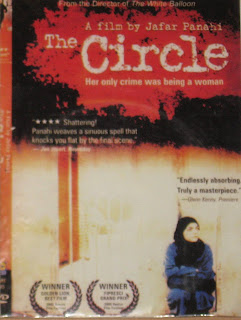 The movie begins in a hospital. We hear the screams of a mother in labour. Soon after, the doctor informs the new mother's mother that her daughter has given birth to a girl. The mother is unhappy - the ultrasound has indicated a boy and her daughter's in-laws may reject her girl child. She tells her niece to call her uncles. At the phone booth the niece bumps into three women prisoners, rebels perhaps, who have escaped prison and are looking to escape the police.

The prisoners try to raise money by selling a gold chain but one of them is caught. The other two then run away - Arezou, the older one raises money and tells the younger one Nargess to make the journey by herself. Nargess gets a ticket with great difficulty - women passengers must be accompanied by men or must have a student ID or they do not get tickets. She persuades the ticket counter boy, get a ticket and goes to buy a shirt for someone she loves. On her return she finds that her bus is being searched by the police and runs away. She goes back to find Arezou, cannot find her and then looks to find another girl Pari who has broken out of prison that day. Pari's father tells her to get lost.

Shortly after Pari is thrown out by her family and she goes about seeking a nurse friend of hers. She needs to abort her child, her husband has been executed. But to abort she needs either the husband's consent, or both the parents' consent. Her friends says she cannot help her. Pari has no ID so she cannot stay in a hotel either. As she walks the road she finds a little girl abandoned by her mother on the road. She sees the mother hiding behind a car she wants some rich family to adopt the pretty young girl. Pari runs away as she sees police approaching.

The young mother also runs away, is picked up by a passing car, which she gets into as she has no ID herself, for some respite. She is detained as a prostitute and is almost arrested. She takes advantage of another road block by the police and slips away, hopefully to go to her girl. At the road block we see a prostitute who is caught with a man.

The man is let off but the girl is sent to prison. In prison we see everyone - the three women prisoners. A guard comes and asks for the girl who gave birth to a baby girl in the first shot indicating that the mother who tried to sell her child was also arrested.

It is interesting to see how the movie goes from one story to another. The old woman at the hospital, the niece, the women prisoners, Pari, the mother and the child, the prostitute. All characters meet or come close to meeting in a connecting scene and the story goes off chasing he other woman. It is very interesting to see the story develop like that in six different stories, each telling the story of women. The need for IDs, the need for men to accompany them to hotels or on travel, the need for chadors, the different treatment given to men over women is quite apparent.

Ban or no ban, certain facts cannot be hidden and what Panahi has shown is only what happens in Iran. World over, few societies respect women. Most, including India, suppress, oppress and subjugate women through societal norms, religion and male domination. The world cannot progress if women are treated forever in such inhuman conditions. The abuse they take even in progressive societies is worse than what is meted out to the backward classes and sections. Truly Panahi has shown that the women of the world are the real backward, oppressed classes, the real 'Dalits' of the world with few rights and few comforts and a life of constant persecution and scrutiny.
Posted by Harimohan at 3:36 PM