I attended the third edition of TEDx VNR VJIET 'Prism' on March 24, 2018. This time my old chum from my cricketing days and a fine IPS officer with many decorations and honours and awards, C.V. Anand, spoke on how massive leaks of public money could be arrested in his one year stint at the Civil Supplies Department of Telangana. In his estimates it was something like 1900 crores - in one department in one year. He said there were 65 such departments and with good governance much could be set right. 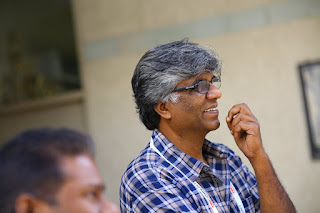 Going back to VNR VJIET is like going back home - the students were warm and helpful as always. Shobha was keen on attending so we went together. Abhinay, Meghana - licencees of the past two events 'Unshell' and 'Paradigm Shift' were there and so was Sloka who was very helpful as always. We met some interesting speakers - Akanksha Bumb of F5 Escapes and her lovely talk about living life on our terms "Every act of independence if a declaration of freedom', Jagadeesh Babu who does work on artificial limbs, a calligrapher, a neuroscientist Dr. Ramesh Mishra, CV Anand and others. 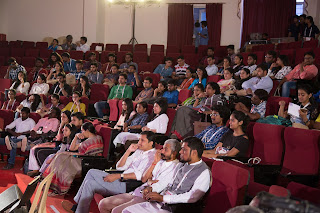 It was wonderful to listen to the speeches. I loved the one line 'everyone has goodness in them' from CV's speech and corelated it to what he told me later. How he sat and convinced these tough guys who bled the system and counseled them and told them that it is not worth living a life with the brand of a thief. He said that once they understood him and felt that someone cared for them they actually changed. Most said they do not mind earning less but living an honest life. Counseling he said, is huge. People just need to be told in a genuine manner. 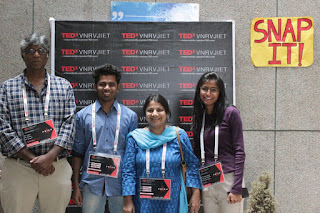 Had a great time as usual. Thanks Vandana - she is the current edition's licensee - the energetic and courteous team of VNR VJIET.
Posted by Harimohan at 12:12 PM