Finally, an Ayn Rand. I was disappointed to say the least because it is exposition all the way. Extreme characters, illogical and inconsistent behaviors, too little action and too much talk. It's what an intelligent communicator (like a masala film maker or a clever politician) would do to shock and awe and get away. I am not impressed with one character in the book - Roark, Dominique, Wynand, Toohey, Mallory, Francon, Keating, Catherine...none. They are full of themselves and cannot see beyond their nose. Their motives are vague...in fact they do not seem to have any motive except to self destruct. 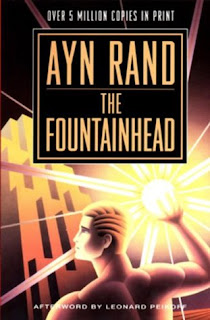 Keating was probably consistent till the end. But as architects they all appear shallow - Ayn Rand could not convince me that she knew her architecture well. All characters are one dimensional and remain like that.

My favorite memory of Ayn Rand from college was this though. I never read her books, and was frankly intimidated by the size of the book and perhaps her reputation as well. I sometimes wonder how I would have been if I read her books in college or if I'd got influenced by communist ideologies then. But for someone who knew nothing of Ayn Rand I remembering hazarding a guess at the favorite author of one rebellious junior who had just joined college, Sarita. My first guess was Ayn Rand and she was surprised that it was so obvious. But she was a good egg, Sarita, with her own mind, so I can give that to Ms. Rand.

So looks like I know Ayn Rand more than I know myself and perhaps do identify a lot with her characters - so much that I do not like them. I liked Roark's way of doing things initially - it fits in with Simon Sinek's 'Start with Why'. There were parts where I felt like I knew Roark well. There were parts when I could understand Dominique's love for Roark. But overall I found them all boring beyond a point. I thought Toohey was overrated and Keating too obvious. She also forgot Catherine conveniently for most part. For a while I thought all three would live together - the way Wynand falls in love with Roark.

I did like the line - 'Love is all about exception-making' - Wynand. Also would like to read Roark's long speech in the end again that probably is what the book is all about. It's so long that one is sure that Ayn Rand must have been like that. In love with her own voice and her own thoughts.

Now to read Atlas Shrugged but after a while. Need a break from Ms. Rand.
Posted by Harimohan at 8:01 AM