An Era of Darkness - Shashi Tharoor

Shashi Tharoor starts with confessing that this book came out of a debate he was in, at Oxford Union, and how he was pleasantly surprised to find the video of his speech going viral and Indians, well read ones reacting to it as if they had not heard of this history before. Suddenly he realised that what to him seemed like a basic History 101 lesson was a serious revelation to Indians and when David Davidar of Aleph reached out to him to fill this gap, he agreed to the task. The book is limited by the talk's scope and more seriously compromised by the stand taken, but it presents the viewpoint he takes cogently. If there is one question I would have liked to have been answered, it was this: why did India cave in so easily? Are there lessons to be learned there for the future? What are we doing about it? Are we on the right track today and are you as a parliamentarian asking the right questions as we move forward? 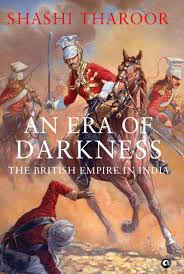 Like most Indians I struggled with my history. I learned so much about India's freedom movement from 'Freedom at Midnight' (I wish Tharoor had written its equivalent then, probably still could) and much about Hyderabad from 'The Last Nizam'. Both these book happened when I was past my forties. Before that our interest in history was probably killed by our history lessons. Whatever we knew was probably thanks to the Amar Chitra Kathas which painted a fair view of history - but then we had to piece it all together and put it in context which we could not. Now after reading several history books and making notes, I still find it difficult to get the exact order right. One of the first things that the book does is give a chronology of the period under scrutiny and I am so glad for that. History 101 is not an easy subject.


So it all started in 1600 CE when the East India Company came to trade in India and set up factories in Masulipatnam and Surat (its headquarters). Shortly after the East India Company approached Mughal Emperor Aurangazeb and was granted permission to conduct business in India - or whatever part the Mughals ruled over. The contribution of India to the world's economy then was a staggering 23% which Shashi Tharoor says came down to 3% by the time the British left India which is indicative of the loot they had engaged in.

In 1939 Nadir Shah from Persia attacked a weakened Delhi and took off with him the peacock throne and all the treasures he could, so much so that he announced that the people of Persia need not pay taxes for 3 years. 1751 saw 26 year old Robert Clive, seize control of Arcot and a decisive victory over the French and thus began a new era of the 'Clive of India'. He next led a successful campaign and defeated Siraj Ud Dowla of Bengal in the Battle of Plassey with some help from a betrayer Mir Jafar, and captured Calcutta which was one of the key and wealthy states or provinces. After the decisive Battle of Buxar where the EIC (10000 soldiers) defeated the combined forces of the Mughal Emperor, the Nawab of Awadh and the Nawab of Awadh (40000 soldiers), the Company was well on its way to becoming more greedy and more ambitious. In 1765 the EIC forced the Mughal Emperor to make the British the revenue collectors and he pretty much had no option but to hand over the treasury keys to them.

In opposition to the growing power of the EIC the King of Mysore Hyder Ali gave stiff resistance by defeating the combined armies of the British, the Nawab of Hyderabad and the Marathas. In 1773, the British granted themselves monopoly of opium manufacture and sale. In 1781 Tipu Sultan defeated the British. Seeing the phenomenal success of the East India Company and its rise, it was brought under the Parliament's control. It is important to know that many of the Parliamentarians were shareholders of the East India Company and reaped rich dividends from its sordid business dealings in India. If the company was to be seen against the light of how companies are to be judged today, it falls short by miles.

http://www.youthconnect.in/2015/07/29/facts-about-the-british-raj/
(This link summarises the talk actually in some 12 bullet points for those who want more concise summaries - appears based on Dr. Tharoor's talk)

In 1793 the British introduced a 'Permanent Settlement' system under which farmers paid not a share of the crop they harvested (which made sense in view of the uncertain monsoon) but as a fixed percentage of the land they owned (which meant that they paid taxes whether there was monsoon or harvest or income at all). Greed at its sickening best. In 1799 they defeated Tipu Sultan through betrayal and treachery again at Srirangapatnam. and in 1835 Macaulay's famous 'Minute' was introduced about how the Indian population must be educated to serve British interests. This included introduction of the English language as medium of instruction and use in offices - which in a weird way led to India as we are today. In 1843 the infamous 'Doctrine f Lapse' was introduced where any king who leaves not a natural born heir and that too a son, will forfeit his kingdom to who else, but the British. The story of Jhansi Laxmibai stems from this injustice.

In 1853 the British introduced the Railways by laying the first rail line from Thane to VT (it was run as a private enterprise that paid huge dividends to British investors costing the Indian railway double its normal cost in Canada and other places and thus ensuring good profits all around). 1857 saw the Sepoy mutiny in Meerut and the bloodshed that followed as an increasingly humiliated India tried to regain independence - a bit too late with too little. The old and weakened Bahadur Shah Zafar was proclaimed the Emperor of India but he lost the battle with the British soon enough and they quickly murdered his sons and thousands others, and packed him off to Burma. From the 1860s labour WAS being sent out to work in British colonies - as slaves, as indentured labour and as convicts - some figures say about 53 lakh of them were sent off by British ships to paces like Sumatra, Mauritius, Africa, Penang, Singapore etc  to build their colonies.

In 1905 the British partitioned Bengal on Hindu Muslim basis and were forced to recall that decision. The British promoted the idea of the Muslim League which was formed in 1906. In 1911 they shifted their capital from Calcutta to Delhi. In 1914 Indian forces fought as part of the British army  and lost 74 thousand of them. Gandhi returned to India in 1915 and in 1919 General Dyer ordered his troops to fire 1650 rounds on an unarmed and innocent crowd of festive revelers on Baisakhi day in Jalianwala Bagh in Amritsar and killed what was an official count of 379 innocents and by unofficial counts thousands. In 1920 Gandhi launched the Satyagraha movement or the Non Cooperation movement which works on the principles of non violence, non cooperation and pursuit of truth or freedom. In 1939 the British went to the World War II and once again committed Indian soldiers to the war. In 1942 came the Cripps Mission and the Quit India movement and in 1947 the British quit India after breaking it into two and leaving 10 lakh dead in the violence of partition.

In the time it ruled India, it is estimated by some sources that the British owe India some 300 trillion. Shashi Tharoor says that when they approached Aurngazed his revenues yearly alone were 100 mn pounds and India contributed to 27% of the world economy which came down to 3% when the British finally left. With 2.6 lakh men at their disposal, the British ruled over India. They used the resources - men, material, riches and enriched themselves. All that they collected they did not invest here and whatever was invested, Shashi Tharoor says, had no charitable or altruistic side to it - they did everything for their gain. Be it the railways, the wars, the education, the health systems, classification of records or castes and religions  - everything was for their gain. They were paid for their stay here and they looted through outright theft or by making laws that killed local competition and entitled them to the business and profits which were sent back to Britain. All this under the Parliament and the Crown's overseeing.

The famines that devastated India (in 107 years of war across the world it was estimated that 5 million died and in ten years of famine in India alone, 19 million died). Churchill's famous decision to divert wheat to British forces when Indians were dying of hunger in the streets of Calcutta (40 lakh  or 4 million died of hunger) and his insensitive remark that it serves them right for breeding like rabbits showed the Raj's attitude to Indians. It was not that food was not available, it was not made accessible by diverting it to stockpile for British troops. The brutal nature of the Raj comes through not just by the Jalianwala Bagh incident but in the many ways the British would kill off Indians - after the sepoy mutiny hundreds of Indians were blown off from the mouths of cannons, satyagrahis were subjected to all kinds of torture, and many murders of Indians by British never acknowledged or tried. The boot and spleen stories were a part I had not heard of - apparently there would be several cases of Britishers kicking their Indian subordinates in their stomachs and most would die of a ruptured spleen - mainly because their spleens enlarged due to malarial attacks. From tea to opium to textiles to iron to locomotives to diamonds and taxes the British paid themselves at India's cost and sent it off back to England.

There were some voices from the British empire and notably Will Durant who wrote about the British loot and greed.

Shashi Tharoor's case only validates what we knew - only he delves deeper so we understand the extent of the Raj's greed. That it was greedy and manipulative was well known. They did that with most of the colonies they colonised. How they were allowed to do it so easily was my question? How can we learn from it? How can we use those lessons for the future?

I suspect that all those who get to wield power behave in a similar fashion. Most are lesser mortals and are subject to the pitfalls of the intoxication of power, especially that which is not accountable as has been the case in India after Independence. It could be the invaders from the North, the Muslims or the traders from the South - when people find a way to take advantage they will. That way I do not have a problem with those who do bad - because human nature is to do bad if given an option. But then what has the victim done to land himself or herself in that situation. What are the enforcers doing? What could they have done? In being open to bribes, to infighting, in looking after their own petty interests and not that of the people, in dividing the people for their own gains - how is India post independence different?

The book was an interesting read and Shashi Tharoor was convincing enough but not to the extent that I feel he would be satisfied with the effort. However as History 101 - Indian perspective, it works very well. The production by Aleph was ordinary - the copy I have looks a shade better than a pirated copy you pick on the street with its offkey and misaligned printing.