Acknowledged as one of the finest books on peak performances and recommended to me by our own Neelam Sreedhar, as early as when I wrote 'The Men Within' in 2007, I finally was ready for Tim Gallwey's 134 page wonder, ordered it, read it and now reviewed it. Tim talks about players who try too hard and who are too critical and how this messes with performance. He says the the normal barriers to peak performance are lapses in concentration, nervousness, self-doubt, self condemnation and the key to overcome these lapses is through relaxed concentration. This is a state which all athletes try to attain on a permanent basis - and Tim says - the true secret to winning is not trying too hard and be in a state where the mind is calm and at one with the body. Of course this state is nothing new to us - we already know it and have used it when we were children. Like children learn - we should watch carefully, grasp the visual image, repeat image in our minds and imitate and voila, we are doing it perfectly right. With some small examples he gets the message across superbly and we wonder at how right he probably is. 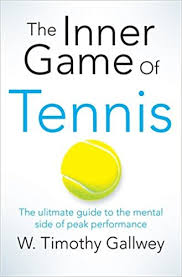 Tim talks about the critic in us or perhaps the thinking and analysing part - the Self 1 as he calls it - who always wants the ideal outcome and who is constantly criticising us for what we do. Then we have our own Self 2 - who is probably the executor and who is probably falling short of Self 1s standards despite knowing it all. The gap between these two Selves is what we must work on and harmonise the relationship between Self 1 and Self 2. (For all you know it could be the manager and employee, parent and child, teacher and student.) For the overzealous teacher, coach and parent he says do not over teach - say less, notice more. Also that 'images are better than words, showing better than telling, too much  instruction worse than none, trying produces negative results".  If you cannot get Self 2 in good shape, the performance will go southward anyway. "I deliver my most effective performances when I permit the spontaneous Self 2 to be in control.'

'What you try to remember, you do not do.'

Be Nonjudgmental
So Tim says, first be nonjudgmental about your performance. Like an umpire who merely keeps the score, you observe things as they are without assigning a 'good' or 'bad' to them. That will keep Self 2 relaxed. Only when Self 2 is relaxed will it perform to potential. So the first idea is not to make it feel like it is under or over performing. The idea is to stay objective. "Give players something they cannot judge as right or wrong. Like, watch the ball."

Visual Imagery, Feelmages
Tim says that the Self 2 is more receptive to images and feelings than words. It understands the language of imagery - images and "feelmages". So visualise the 'feel' of a perfect serve or return and the outcome after that. As an instructor, he says, words have limited effect. Words appeal to Self 1 which after the initial aspect of communication is done, starts to intellectualise the process. This is where one gets too caught in the technique and less in 'doing' or applying it.

"Get clearest possible picture of the outcome." Tim asks the player to get a clear visualisation in the mind, perhaps modeled on a role model if need be, and once that visual is imprinted in the mind, with its attendant 'feelings', tell the Self 2, or the body, to execute it. Then just do it without any further thinking. Trust the Self 2 which has taught you to walk, run and do many things without Self 1's needless wordy instructions and ideas of perfectionism.

Quiet Self 1
"Man's greatest works are done when he is not calculating and thinking. Childlikeness has to be restored." Slow the mind, less thinking, calculating. Remain thoughtless, drop judgment. Self judgments become self fulfilling prophecies. Errors are part of the development process. Watch yourself in the mirror. Let students teach themselves.

Trust Self 2
Trust Self 2 to perform at its best, learn from success and failure. It will deliver. If it does not, sharpen the picture and feeling, and do it again. The key is not to judge the results again. Let it happen and it will. The results will show up.

If there is a problem area - imagine Self 2 already knows, that it can learn, imagine the arc and details of the ball and hold image, keep at it. One experiment he did was to hit a stationary target with a ball aiming to hit. In the second method he first breathed, relaxed, looked, visualised and let the body hit it. Ask Self 2 to hit it. In another experiment he asked them to pick a bad habit and try to correct it hard. In the second method he asks you to make no attempt to change your stroke, Observe, don't analyse. Create an image. Give an image. Feel. Focus on seam of ball. Let it happen.
Ask for qualities- we normally play the role of a worse player than we are. Instead play the roles of top players, adopt their professional mannerisms, show no self doubt.

Relaxed Concentration
Tim says that this will relax the body and the mind and increase focus. He gives a few tips on concentration. Learn to focus the mind, don't fight it. Still the mind, Focus quiets the mind, stay here and now, relaxed concentration.

One way is to watch the ball - focus on the sight of it, the seam and the pattern it makes, or some subtle way like watching the bat face. You get natural focus when the mind is interested. Another way is to listen to the sound and try to find the sweet spot. Another way is to feel it, feel of the arm and hand at the moment before moving forward, imagining oneself in slow motion, every part, every muscle. Finding the rhythm. Requires body awareness.

How to take the focus on the bat swing etc and  pick a cue to which one can react. Like watching the seam of the ball, or thinking about where the racquet's head is when the ball is bouncing. Or how to focus on breathing to stay 'here' and 'now' between points. All of these are devised to keep Self 1 and its constant chatter out and allow Self2 or our natural self, or the subconscious (never uses the word in the book), to do what comes naturally to it. It knows what to do without telling it. 'Let your body hit the ball. If it does not happen, let it learn.
Watch. Absorb visually. Feel by imitating.

Tim feels the body or Self2 seems to know a lot more than we give credit to it for. If we do not put it down, or constantly berate it, and in fact respect it and allow it to function, or even trust it to perform miracles, it will. It is our lack of trust in it that restricts it.

It's there. Don't change it. Let it come out. Be aware,. Where is the ball. Where is the bat. Stop correcting faults. Let go of judgment. Stop criticising. Stop compliments. Allow them to think. No credit. No ego. Non judgmental awareness.

Instructions 'should' not be given. Give instructions in a way that it helps the natural learning process and not interfere with it. Understand the basic requirement - to hit the ball.

To Change habits
Forget the unnatural ways of learning. return to childlike ways. Understand the groove theory of repeating patterns so the grooves go deeper. Do not fight old habits. Start new ones.

The traditional way is to criticise and judge, give wordy commands, try hard and then criticise results. The Gallwey method is to observe, picture, let it happen and be non judgmental about results. Watch Self 1 and Credit Self 2.

Tim says that it is about winning the inner game. The opponent must not be feared but respected because your value is only as much as the fight he puts up. Welcome obstacles, welcome competition.

Stress
Stress is a factor of being attached to one outcome. The cause of most stress can be summed up by attachment. Self 1 is threatened when change occurs - it is attached to comfort. Freedom from stress involves being able to let go of anything when necessary, and know that one will still be alright.
Look instead for inner stability. Focus your attention on the present moment. It is the art of doing anything well. Not duality or mistakes.

"I have been my own stressor. The demands i am trying to fulfill are not m my own but ones I have picked up early."

True Competition
In true competition no person is defeated. Both players benefit by their effort to overcome the obstacles presented by the other. Instead of a double fault, you are looking for a tough challenge so it helps you get into a better mental state. Both grow. In the end you shake hands with your opponent and regardless of who won, thank him for the fight and mean it.

The Key to Relaxed Concentration
When the mind of fastened by the rhythm of breathing, it tends to become absorbed and calm. When your attention is in the here and now, the actions which need to be done in the present have their best chance of being successfully accomplished and as a result the future will become the best possible present.

So far I have written from memory of the book and have not even had to refer to it a second time. I will eventually refer to it again because it is too good a book to not read again and again. But this is the beauty of such books, that it conveys all it has to in the first read. No tables, no bold letters, no highlighting, nothing. Just plain, clean, clear headed, well intended writing. Its beautiful. Naturally its not just about tennis - its about life. Much of what is said here is applicable to the great books and thoughts - the Gita, the Zen and Tao books. His concern for the players and their psyches, for people thinking that a bad backhand makes them a bad and hopeless person is genuinely felt and more empathetic and kinder than many educationists, policy makers and even psychotherapists can ever be.

I am going to read it again and will revise this blog because it is a wealth of information and must be treated with great respect. Meanwhile I am trying to apply the practices. A bit of it I tried on the kids at cricket practice too. I am sure of the results. Makes immense sense.
Posted by Harimohan at 4:20 PM