The Israel-French movie starts and ends in the courtroom and at best - moves to a room outside the court room. In that closed space and with just seven characters, director and lead actress Ronit Elkabitz packs a punch and proves that nothing can beat the drama of human relationships, more so, those between husband and wife. It is apparently the third in a trilogy - the first being 'To Take a Wife' and the second being 'Shiva'. Gett is divorce in Hebrew. 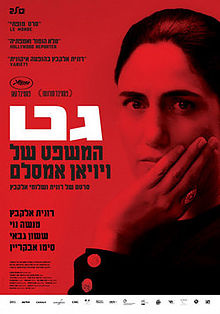 The first scene starts with the rabbanic judges panel of three addressing the woman who wants a divorce from her husband and her lawyer. They find that the husband does not honour his commitments to the court but are helpless to grant divorce. Then on starts a long legal battle where the husband tries every trick not to grant her a divorce. She is adamant she wants one. They are unable to prove any cruelty on the part of the husband and there are no grounds except that she does not want to live with him. They cannot prove that she has been unfaithful either. But the judges cannot grant divorce, he has to do it. He finally agrees after five years of the court room battle and stalls when he has to say words to the effect that she is now free to live with any other man. Only after he makes her promise that she will not be with another man doe she grant her a divorce.

People are cruel. Relationships are a great place to exercise this cruelty. Though there is seemingly nothing wrong with the way the husband treats his wife or the way she treats him, you know everything is wrong. The divorce will hurt and not giving the divorce will condemn her forever. Society looks modern but laws are so archaic and lopsided.

Taut. Cannot take your eyes off the screen for moment though seemingly nothing is happening but the lawyers and the husband and wife trying to get their points across. Brilliant stuff.
Posted by Harimohan at 9:42 PM