Dying To Be Me - Anita Moorjani

Anita Moorjani is a name that often comes up when there is talk of Near-Death- Experiences. She is the most famous face of NDE (that I know of) and gave many theories and ideas of what happens after life etc a clear perspective from someone who has been there. Born in Singapore in a Sindhi family, Anita experienced typical dilemmas of all young girls in the subcontinent - be this way, dress this way, get married, cannot study abroad etc. She had the temerity to break off an engagement and almost died of guilt but then she found her love, David Moorjani and they settled down to a happy life. Next social pressure - have children. After six years of married life, Anita, who lost her father and her best friend Soni to cancer, got lymphoma. 'I think I was so scared of cancer, that I think willed it almost,' she says. 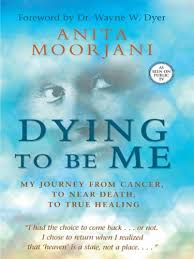 What happens next is the interesting part. Anita does everything to fight cancer. Yoga, hypnotherapy, meditation, forgiveness and every single alternative therapy she could find. She spent time with BKS Iyengar in Pune and actually got better. Then she went back and got worse. As the cancer spread she slipped into coma and died. For all practical purposes. Or so the doctors thought.

But Anita remembers everything clearly. Her painless, ecstatic state as she could see everything happen around her simultaneously. She felt an expansion she says, could feel oneness, bliss, love. She could see things far away - like her brother who was on a flight to see her, like the doctor speaking to her husband in some faraway corner, a paramedic giving up on her. Then she crossed over and heard her dead father speak to her, as did Soni. And they spoke to her with no judgment, only unconditional love. They told her that they have always been there for her, for everyone in the family and it was all perfect.
"I'm loved unconditionally for no other reason than simply because I exist."

"God isn't a being but a state of being."

"I became aware that we are all connected."

Anita was given a choice - to go back to her life, or move ahead and join her father in the other world. Anita obviously wanted that painless, ecstatic state but when asked again by her father at a point where she could not return from, Anita decided to come back.

"Cancer was not punishment for anything I'd done wrong, nor was I experiencing negative karma as a result of any of my actions. My many fears and my great pains had manifested in this disease."

"Dad, I feel like I have come home.
You always were home. Remember that."

"Our communications weren't verbal but a complete melding of mutual comprehension. It wasn't that I understood my father - it was as though I became him."

"I was aware that he'd been with my entire family all through the years after he passed."

By now she knew everything would be alright including her cancer and even if it was not, it was ok. That was a beautiful thought. Also that her life had a purpose.

Then the magic happens. Within five days after coming out of coma, Anita recovers fully. Biopsies show no trace of cancer. It's a medical miracle. Anita simply says she knew. If she chose to die, the reports would have shown accordingly and if she wanted a different outcome, the reports went that way. All possibilities were okay with her.

"I discovered that since  realised who I really was and understood the magnificence of my true self, if I chose to go back to life, my body would heal rapidly - in days. Doctors wouldn't find a trace of cancer in my body."

"My body is only a reflection of my internal state."

"If my inner self were aware of its greatness and connection with all that is my body would reflect that and heal rapidly."

"To access this state of allowing the only thing I had to do was to be myself (without judgment or feeling that I was flawed."

"We are pure love. Realising this meant never being afraid of who we are. Love and true self are the same thing."

"The reports changed depending on my choices."

Anita's key thoughts (as I remember) are of how we are all made of unconditional love. And when we choose to be that love, she says we will stop living out of fear. Our lives are not meant to be lived fearfully she says, and says that was why she probably contracted cancer, because her body could not express itself any other way. She talks of not being attached to any outcome, to any belief, and instead to trust and be open to all possibilities. She speak of surrender. Of enjoying life. She says that it is all going as per plan, so don't fret and worry.

Some quotes
"I just had to be myself, fearlessly. In that way I'd be allowing myself to be an instrument of love."

"I knew that there wasn't going to be any judgment waiting for me in the after life if I chose not to follow religion or cultural dogmas that didn't feel right."

"My life and time here are much more valuable to us."

"We are all one, we are love at our core, we are magnificent."

"If things seemed challenging, instead of trying to change them physically, I began checking with my internal world. When the internal changed, the external changed."

"Centered is experiencing being at the centre of my cosmic web, being aware of my position. It's important to feel our centrality at the core of it."

"I wouldn't have to do anything. It would just unfold as long as I allowed it to happen."

"We already are what we spend our lives trying to attain."

"Everything - tests, biopsies - were being done to satisfy everyone."

"I am strongest when  let go, when I suspend all beliefs and leave myself open to all possibilities.
I surrender."

"I am most powerful when I flow with life, not against it."

"The only thing that keeps me from being aware of the Universal Energy is my mind - my thought, my self-limiting thoughts."

"Why did something so big - like this terminal cancer thing-happen to me just for not realising my own magnificence?"

"Ohh, I see- it didn't happen to me because in truth, I'm never a victim. The cancer is just my own unexpressed power and energy! It turned inward against my body, rather than outward. I knew it wasn't punishment or anything like that. It was just my own life force expressing itself as cancer because I did not allow it to manifest as the magnificent, powerful force of Anita."

"From my point of view, strongly held ideas actually work against me. Having concrete beliefs limits my life experiences because they keep me locked into only what i know, and my knowledge in this world is limited by my physical senses. Being comfortable with uncertainty on the other hand, opens me up to all possibilities. Ambiguity is wide open to infinite possibilities."

"Needing certainty shackles my potential for the unexpected. Feeling I don't know, or Let's see what happens, allows my expanded self to provide answers and solutions that may be completely serendipitious and outrageously synchronistic. When I step into the realm of my ambiguity I'm really at my most powerful. Letting go of all my previous beliefs, disbeliefs, dogma, and doctrines puts the infinite universe at my disposal and works to give me the best possible outcome for my life. This siw here I receive my most internal clarity. It's where magic happens."

"When something comes from the center of our being, it's no longer an action - it becomes who we are. We don't need to think about it or work at it. We become an instrument for service to manifest on this planet. This is the difference between being of service and performing a service."


I loved the book and her story. She has two books and I would like to read the other one. She is a speaker too. But all that she says resonated profoundly.
Posted by Harimohan at 1:22 AM