Ferdinand is a bull - a flower bull as the other young bulls taunt him. He loves flowers and all things gentle, abhors fights and conflict, and is generally seen as a sissy while all other young bulls aspire to go to the bull fight and defeat a matador. All bulls are bred in the famed Casa Del Toro and well, the young bulls see their fathers go to the bull fight (and not return). Ferdinand, who sees his father not returning from the fight runs away from the bull farm and lands up in a farm where he is raised by a friendly family - a young girl, her father and a dog. Ferdinand loves life on the farm and grows into one of the mightiest bulls strength-wise, but retains its gentle approach to life. 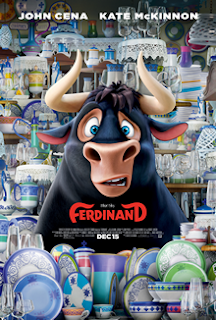 On one visit to the farmer's market Ferdinand's behavior is mistaken for aggressive behavior and he is sent back to guess where - Casa Del Toro. He meets his old pals and some new ones. They make fun of his peaceful ways and tell him that the bulls must fight and compete. Ferdinand does not agree. He in fact arranges for all the bulls to run away from the place telling them there is no way they will ever win a bull fight. The bulls run, Ferdinand is captured and chosen for the bull fight. He does not fight and actually makes the matador attack him while he side steps - it becomes a role reversal for a while - in a cleverly written scene. In the end the crowd falls in love with the bull and ask the matador to spare his life and all's well and it ends well with flowers being thrown into the ring. Ferdinand takes all the bulls back to the farm and they live happily ever after.

Moral of the story - you can be the way you want and not get stuck in roles and labels. Nice movie and very watchable indeed. Especially with some caramel popcorn. Ferdinand reminded me of a Hollywood actor but these days all animation characters remind us of some character or the other. How subliminal.

Posted by Harimohan at 9:26 PM