When I first saw this movie I remembered nothing or I could not figure out much. All I could make out was that there were two people who met on a train and for some reason went to a company that erased their memories which must have been painful. Of course we meet many more characters in that memory erasing company, all of them either sleeping with one another or using these memories to get someone to sleep with them, including the big boss of the firm. 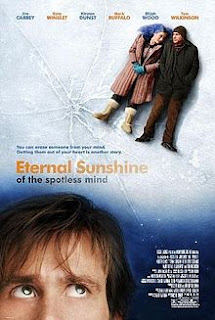 Upon more research I find that this movie has some resemblance to a romantic story I had written many years ago - at least the pivotal aspect of it when Kate Winslet apparently tells Jim Carrey to meet her somewhere. This is the pivotal moment in 'If You love Someone' the novel I had written. Since there is some similarity I will now concede that I will like this movie that is otherwise quite maddening in its suppositions.

So two people meet on a train and are drawn to one another. They are actually on a journey which they had promised one another but had now forgotten thanks to the memory erasing company and all that stuff. Why anyone needs a memory erasing company I don't know because people only remember what they want to anyway - and since I have a problem with that part itself - I can as well let the rest of it rest.

Overall achievement - ticking one of those 100 movies lists but seriously. Ok, for Kate Winslet, I will let that go. No point erasing her memory.

Posted by Harimohan at 3:20 PM