1958 vintage. Funny movie. Gang of thieves tries to pull off a robbery. Lots of twists and turns, some love, some conflict. All losers so, very likeable. 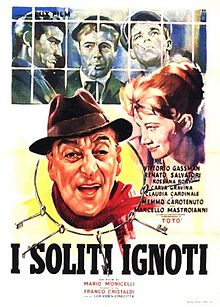 The movie starts with a car robbery gone wrong. The thief goes to jail. In jail he schemes to get himself out by having someone tell the judge that he was the car thief and not he, for a sum of course. So we have a whole lot of small crooks lining up for the job but with their own problems. One is taking care of his baby because his wife is in jail, one has locked up his sister whom he wants to get married to someone respectable, one is very old and perpetually hungry, one is a boxer who loses more than he wins etc. Anyway boxer goes to relieve the thief but the judge sees through and sentences them both to jail. In jail the boxer learns of a way to crack a pawn shop through the car thief and somehow gets parole before him. So he rounds up the losers bunch and they try to crack the safe. Of course nothing can be expected from them - they bungle everything. Boxer falls in love with a maid in the house. One of the others falls for the sister. Car thief comes out of prison but dies in a road accident. Well, nothing much changes in their life but for some drama and some love. In an ironic twist, the two main robbers, the old man and the robber, get stuck in a line of people looking for work while escaping the police - something that is the worst fate for them - worse than jail.

Complex story but lovely. I loved every single character and their mannerisms, especially the master thief who comes as their consultant for the robbery and gives them the master plan. Super stuff.
Posted by Harimohan at 11:34 PM