I Take This Woman - Rajinder Singh Bedi in Punjabi, translated by Khushwant Singh 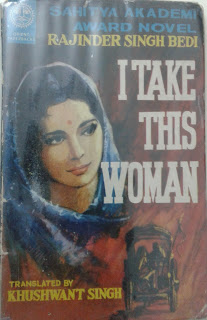 The story is about Rano, who is married to an ekka (tonga) wala Tiloka. She has four children. Tiloka drinks and beats her and is known to transport young girls to the Chaudhary's house in exchange for the heap orange liquor. They live with Tiloka's old parents, and his younger brother Manglu. Rano treats Manglu like her own son and when there was no milk at home suckles him. Rano has no one but them as her parents left her and went away.

One fine day a young boy kills Tiloka and injuries Chaudhry. His younger sister was taken to Chaudhary. The survivors go to jail. Rano is told by her mother in law to get out of the house. Her oldest daughter is now old enough to get married. In all this comes a suggestion from the village women that if Rano marries her husband's brother it would be fine. Manglu was old enough to be married and he was already lusting after Salamat, the young Muslim girl. Against their wishes the village elders and community get the two married. They live quietly in confusion, not accepting their fate. But the girl has to be married off too and they finally find someone who is willing to marry her and only her - turns out it is the boy who murdered Tiloka. After some confusion they agree and everything settles down.

Lovely twist in the end. Beautiful story. Fabulous translation by Khushwant Singh. One can imagine the richness in Urdu.
Posted by Harimohan at 3:41 PM