Knife in the Water - Movie Review

This is a 1962 Polish film and a Roman Polanski classic recommended by Sagar. A well-to-do couple is driving to go sailing when they almost hit a young hitchhiker. The older man, who is a bit of a perfectionist and who prides himself on knowing many things, finds in the young hitchhiker a good person to taunt and takes him sailing. The young man does not know sailing so the older man bosses him around which the younger man does not like. 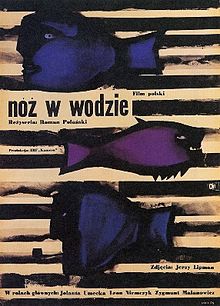 There is growing tension between the two men and it is clear that the older man is trying to show off before the woman without much luck. It turns out that the young man is no fool either. He scales the mast in minutes, is strong, and though he says he cannot swim, has several other talents, Like making up poetry. He also has a knife in his rucksack which the older man removes, worrying about a showdown. The younger man says he does not need a knife to handle himself. In the skirmish, the knife falls into the water. Then the younger man falls overboard. When he does not surface, the woman tells the older man that he has murdered the boy - he cannot swim. After much taunting the older man goes to report to the police and then the younger man who was hiding near the buoy comes to the boat. He and the woman feel the sexual tension between them and one thing leads to another. The boy jumps off the boat before the older man comes on board. The older man is clearly afraid to go to the police and the woman establishes it first before telling him that the boy had come on board and that she had been unfaithful to him. The older man does not want to believe her - he says that she is saying that to save him from the police. But deep inside he knows. The movie ends with the car stranded on a fork in the road.

It's simply brilliant. The way the ending is conceived where the woman uses the information she has to put the man in the spot and all of human nature comes out to play is simply outstanding. Three characters, a boat, and the water. That's it. Roman Polanski's first full length feature film and what a film. Must watch.
Posted by Harimohan at 6:47 PM