The Day of the Jackal - Movie Review

Based on Frederick Forsyth's 1971 novel 'The Day of the Jackal' was made in 1973 to critical acclaim. The novel and the movie are based on a fictitious follow up plot to the real assassination attempt on French President Charles de Gaulle in 1963 by the OAS. The OAS is an underground group that is annoyed by the President's decision to grant independence to Algeria. The group's head was captured and executed after the botched attempt by the French secret service. The movie plot takes off when the remaining group members decide to hire a professional assassin to perform the deed and complete their mission. 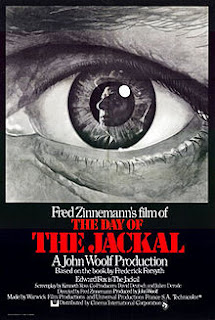 They identify their man, known only as the Jackal and pay him his fees by looting a few banks. The French secret service is onto it and find out about the Jackal. The OAS has a honey trap for a man in the secret service who knows the inside dope. In a seesaw battle of wits between the secret service's best detective Lebel and the cold blooded Jackal, the plot goes down to the wire. The Jackal, who goes ahead with the plan despite being warned that his cover was blown (professional pride?), manages to get a perfect shot at the President, but de Gaulle's guardian angels are alive and well and he is saved. Before the Jackal takes his second shot, Lebel finds him and guns him down. The Jackal is buried in an unmarked grave and in the end no one knows who he really is.

The trademark cross hairs one remembers on the book cover, the ruthless killer Jackal and de Gaulle's miss are legendary stuff we do not forget easily. It was lovely watching it all over again.
Posted by Harimohan at 1:16 PM