It's a1952 classic. 125 minutes long. A small town, Hadleyville, is suddenly faced with the prospect of dreaded criminal Frank Miller's impending arrival by the noon train. He was caught and sentenced for murder but he has now been released and is heading back - presumably for revenge. The Marshall of the town Will Kane (Gary Cooper) is certainly on his hit list for actively engaging in catching the villain. But Kane just got married to Amy (Grace Kelly), turned in his badge and was just heading out with his new wife when the news comes. 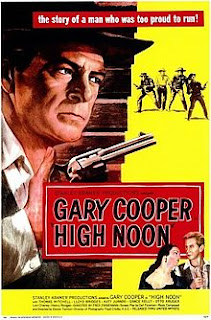 Kane cannot go on a honeymoon leaving his town to Miller so he heads back despite his new wife's threats. Duty over Grace Kelly! In the town he finds no support. His deputies desert him. It's an hour to noon and Kane is by himself when Miller comes into town with his three friends. A gun fight ensues and Kane finds an ally in his new wife who returns to help her husband.

Kane and his wife leave the town after the villains are killed.

Simple and straight forward. Lovely music. Won four academy awards. Directed by Fred Zinnemann who also directed 'The Day of the Jackal' among many other films that won him four Academy awards and several of his actors as well. He gave breaks to actors like Brando and Meryl Streep. Whew!
Posted by Harimohan at 5:33 PM