D.H. Lawrence understands human psychology better than most and has the ability to articulate the most complex human emotions and situations lucidly through his writings. After 'Sons and Lovers' I was keen to read his most controversial work 'Lady Chatterley's lover' and was glad that Abhinay had a copy which he lent to me. 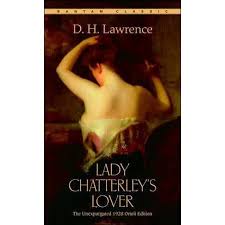 Lady Chatterley is young Constance Reid, married to Sir Clifford Chatterley, into wealth, fame and position. But Sir Clifford, a soldier, suffers a war injury in World War I which leaves him paralysed from waist down. Lady Chatterley dutifully takes care of him, neglecting her own life. Sir Clifford seems to enjoy her attentions and the power he has over her. It is all fine until Lady Chatterley's sister, Hilda, comes to visit and finds her sister looking pale and undernourished. Hilda, on the verge of divorce, tells Clifford to get some help because Connie is wasting away. Despite his reluctance she gets him a  female nurse, the buxom and worldly wise, Mrs. Bolton.  Connie finds time to breathe and also find love in the arms of the impertinent and impudent gamekeeper, Mellors, who is an ex-soldier who served in India, married and separated and somehow seems to have a bone to pick with the world. Lady Chatterley does the unthinkable an has an affair with Mellors and it is like love she has not known. In the backdrop of Clifford wanting her to have an affair (decently) and give him a son for his fortune, it does not seem a bad idea except that Mellors does not belong to their class. Mellors, despite his rough ways, is only pretending, because he is well read, well built and does not give a hoot for the world. His lovemaking also has the same quality, of roughness and tenderness.

The conversations between Clifford and his friends, affected and yet explorative, pitch forth some ideas, while the conversations between Clifford and Connie and even Mellors and Connie, explore all possibilities of love, sex, lust, men and women and their relationship. Connie finds the act of love making especially the man's actions ridiculous and even laughable. Mellors finds women easily but not one who enjoys the act as he does and when he does find one, finds she comes with other aggressive behaviors too.  He thinks nothing of Hilda and tells her that she is the kind who will never have a happy life nor give her man one, tells Connie that she has the perfect body and the sensitivity to her lover (which his wife did not have and who used sex as a power tool), tells Clifford that his incapabilities do not mean that Mellors suffers from any such. A conversation between Mrs, Bolton, who finally draws Clifford to her bosom, and Connie, reveals the nature of her understanding of men. They are like children and you can get them to do whatever you want if you make them feel like they thought of it first - she says. And how she maintained peace when push came to shove with men. Superb insights into the male mind.

Connie risks everything. One wonderful scene where both she and Mellors gambol in the rain, stark naked is brilliantly written and visually evocative. She goes to Venice, by which time most people somehow know of the affair thanks to Mellors combative wife, and Connie comes clean. Mellors works at getting his divorce. Connie works at hers though a revengeful Clifford refuses to give her a divorce and the novel ends with both waiting to live a life out on the farm together.

D. H. Lawrence once again is brilliant at his understanding of the often opposite emotions attached to intense emotions and dips into them effortlessly. What is forbidden is also pleasurable, what is pleasure is also pain, what is love is also hate and what is hate is love and so on. It is almost as if he explored almost all elements of love, lust, sex in this book and discussed all that he had in his mind. The characters are pitch perfect and true to themselves - Clifford, self obsessed and wanting to control despite his lack of control, Connie, somehow feeling guilty about Clifford's condition until she realises that there is a life to be lived, Mellors, brutally honest and intense, constantly fighting  the world. Mellors comes across as a 'real man' as opposed to the other men who are weak in their aspirations and their wants.

As a story it is simple and at times it feels that there is a lot of blatant exposition of certain ideas through the characters but as a theme in 1928 it is beyond bold. He printed it himself, a limited edition, despite the obscenity laws. Penguin fought a famous Obscenity Law case in 1960 when it was first published in UK and won and then some feel, sexual freedom of some sort was allowed. But then these were also men with conviction so they would back up their work with all they had. The writing is insightful providing deep insights into the complex human mind, relentlessly and shamelessly keeps at the love and sex aspects and keeps it as honest as raw as it could be.

In the end it could be seen simplistically as a forbidden love story between an upper class girl and a lower class man. But it is much more than that of course.
Posted by Harimohan at 12:26 PM