Looking at Kolkata with new eyes this time. And loved every bit of it. The women looked so pretty and sweet and spoke so sweetly and animatedly that I fell all in love with them again. (The men were equally passionate and animated.) Kids made intelligent conversation about books and literature with the assurance that seniors don't have in other places. Bookstores were full. Places to eat. The place reeked of history. Large grounds, old British buildings, history, history everywhere. I just had a couple of days so I kept my eyes and ears open and soaked it in as much as I could. 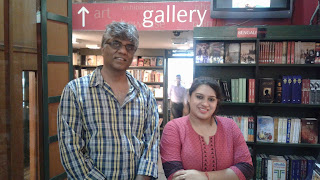 I spent enough time at Oxford Book Store on Park Street. It is what they say 'the best book store in India'. It has an appealing facade, and then there are shelves and shelves of books cascading on either side. Its crammed with books which is what you want to see in a bookstore and there are nooks and crannies all around where you can disappear into and browse through books. I must confess I did not go all around the bookstore which I should have. There is a lovely cafe upstairs called the Cha Bar if I am not mistaken with a lovely menu (superb sandwiches which i ate and fish and chips which I did not). People meet, discuss, eat and move on. I would have found it the ideal place to meet a date. There is a small space for a book reading at the same level. 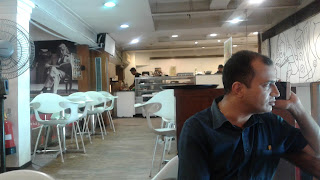 Park Street also has the famous Trincas which I did not visit. Nor did I go to Fleurys. Nor did I as the elegant Chand Ahluwalia suggested, go to the pub at Park. But we visited the famous Peter Cat which is famous for its Chelo Kebabs. Sudeshna advised me to eat some rolls and specifically Kusum rolls. I could not manage that. The Chelo kebabs were a revelation - they are a full meal with kebabs, rice, butter and some other stuff. Delicious. In the Park street I also had the strangest of circumstances - a panwala telling us that there is no paan left. I could not believe it. What kind of a paan wala is this? 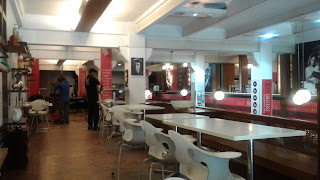 I visited Belur math, something I had not done when I stayed in Kolkata in 1991 for my first job. It is located in Howrah so we crossed the Howrah river or the Ganga (or a mixture of both) and went through narrow lanes in Howrah. After a 40 minute drive we reached the Ramakrishna Math and / or the Ramakrishna Mission, two organisations that propound the Ramakrishna Movement's thought (and the Vedanta movement's). They are named after Sri Ramakrishna Paramahamsa (1836-1886), the ascetic, who lived in the Dakshineshwar temple as the priest and who had a vision of Goddess Kali. Sri Ramakrishna had early inclinations towards spirituality, had ecstatic experiences, met spiritual masters and learned and mastered the Tantrik path and attained the Nirvikalpa samadhi. He came to believe that all routes lead to the same god and famously said 'as many faiths, so many paths'. His teachings included all religions and focussed on harmony of religions, potential divinity in every being manifested  by his acts and thoughts, treating all work as worship and treating service to man as service to god and to alleviate human suffering. The math was started by his chief disciple Swami Vivekananda, who bought this lovely piece of land on the banks of the river and built the math.
Once inside the match which is a sprawling place spread over several acres we took off our shoes (despite my guide trying to make me wear them and keep them at all the 'don't keep shoes here' boards). We visited the Ramakrishna museum first, which displays several belongings, letters of Ramakrishna Paramahamsa, his wife and spiritual consort Sarada Devi. One thing that caught my eye was the letters - one of them written by the Raja of Khetri if I am not mistaken - and the writing is so beautiful in its expression and its handwriting. We don't see that anymore. Such lovely thoughts, expressed clearly, boldly and with no ambiguity. After a quick tour of the museum, we went to the shrines of Swami Vivekananda and Sarada Devi. Then saw the room where Swami Vivekananda lived for the last part of his life, with most of his belongings in that room, and below that room, the mango tree under which he would meet people and talk. Then the magnificent Sri Ramakrishna temple with its lovely meditation hall that is so peaceful. The temple apparently has motifs of all religions. Then the place for sale of books etc. The book to read is 'Gospel of Sri Ramakrishna' (need to get my hands on this - he apparently spoke only in parables).

I found Belur math one of the most beautiful and peaceful places I have ever been to. The people who visited the math also showed reverence and an understanding of the place - there was none of the touristy arrogance or ignorance on show. People sat in meditation near the room where Swami Vivekananda lived.

I have always found Swami Vivekananda (1863- 1902) very intriguing. Born Narendranath Datta, he was precocious and was good at sports and studies. By the time he passed out of the University of Kolkata, he was already well equipped with history, philosophy and much more and thirsty for more. That was when he was directed to Sri Ramakrishna and they say he asked his question directly - have you seen God. Sri Ramakrishna said, yes, I have. And that began one of the most interesting relationships that spread so much good in the world. In 1881 he was initiated into the monastic way and before the demise of Sri Ramakrishna in 1886, also had an idea of his mission and purpose. In 1890 he set off on a tour of India and understood the reality of India and why the masses were stuck. He realised they needed secular and spiritual education to liberate them from their poverty and downtrodden lives. He advocated and preached the idea of Atman - or the idea of potential divinity in every being, which he felt was kept away from the masses. He went to Kanya Kumari and found more clarity of purpose. In 1893 he went to attend the World Parliament of Religions and impressed one and all. He stayed there for three years and returned to India in 1897. That was when he started the Ramakrishna Mission. As I write this I can see on my desk a calendar given by my friend Shiva which has Vivekananda's sayings and this one for today - 'It is faith that make s alion of a man.'
From the math we went to the Dakshineshwar temple where the Goddess Kali is worshipped. It is here that Sri Ramakrishna's older brother was first called upon as head priest and then Sri Ramakrishna took over as head priest after his demise. It is in this temple that he had a vision of the goddess Kali. The temple stands on the other bank of Hooghly. There is a modest room where Sri Ramakrishna lived and his articles are still there for display. People sit there and meditate. On the river side of the temple there are 10 Shiva temples. Someday I would like to send more time at the Belur math.

On the last day I visited the Victoria Memorial. Magnificent structure, fabulous lawns but no great significance I felt. It is described as a 'large marble building built between 1906 and 1921 and dedicated to the memory of Queen Victoria'. It somehow looked a bit hollow. But the greens, the water, the sky, the nearby cricket grounds were all so pleasing to see. Saw a glimpse of the Eden Gardens from far. 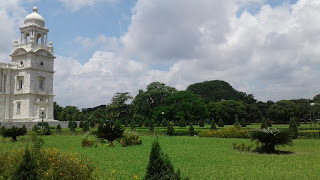 That is it for now. More of Kolkata next time. Presidency college, Coffee House.
Posted by Harimohan at 11:50 PM