Cute. It goes back to 1995 which is two decades removed and for those of us who feel it was not too long ago, the movie shows us how far we were from the reality of today. Landlines, cassette players, scooters, band baja baraats. Set in a beautifully shown Haridwar, the movie grabbed me completely. I love that part - watching the Ganges from the roadside in Haridwar or even from the Lakshman jhula in Rishikesh. 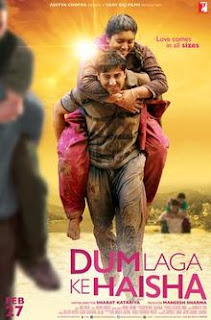 So the young cassette shop owner Prem is forced to marry the well-educated but rather big sized Sandhya, because she could well get a job and that would take care of the dwindling finances of the family. However the Kumar Shanu loving, member of an orthodox Hindu sect that preaches and practices all sorts of physical exercise and restraint blended with patriotism, Prem cannot bring himself to love his wife, unable to deal with his internal conflict. After a while, the strong willed Sandhya walks away after expressing herself in no uncertain terms to all members of the family. She files for divorce through a young, good looking, American English speaking lawyer, and the judge orders a mandatory six month cohabitation. It is during this period that the couple enters a couples race called 'Dum Laga ke Haisha' and guess what.

Be it 'Tanu weds Manu' or 'Dangal' or 'Dum Laga ke Haisha' or Mere dad ki Maruti' or 'Masaan' or 'Badrinath ki Dulhaniya', the way the directors capture the essence of the small towns is fantastic. I was transported back to Haridwar. I loved the places, the characters, their hopes and aspirations, their fears and apprehensions. Superb stuff. And that song 'Moh moh ke dhaage' is one of the few that has crept into a growingly cynical heart after a long long time. Like Piku, I could watch this movie again and again.
Posted by Harimohan at 11:39 PM