It's an icelandic saga of the 13th century. The saga starts with a dream that Thorstein has - of two eagles fighting over a swan and both dying. Upon seeking an interpretation he is told that the two eagles represent two warriors who kill each other for his daughter's hand and the hawk that arrives later finally gives her peace. Unhappy with this prediction Thorstein tells his wife to get rid of any daughters that they may have. She has a baby girl and sends her away, while telling Thorstein that she has killed the baby. 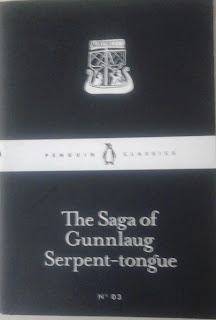 The baby grows up into a beautiful young lady Helga the Fair and is reunited with Thorstein. She meets Gunnlaug, an interesting young man, a poet and share a friendship. They even plan to marry but Thorstein is not sure if Gunnlaug has done enough to earn his daughter's hand. The poet meets another poet, Hrafn, and thus begins the tale of the deadly triangle. Hrafn finally gets to marry Helga but she loves Gunnlaug. the two poets survive one deadly duel and succumb to the next. Helga marries a third

Full of love, courage, style and drama. Loved it.

Posted by Harimohan at 9:44 AM