It's actually titled 'How I Raised Myself From Failure to Success in Selling'. Frank lived in the early 1900s and is a contemporary of Dale Carnegie who wrote the Foreword for this book. For once the Foreword got me hooked because Dale says that the first chapter "How One Idea Multiplied My Income and My Happiness" is one of the most inspiring. Frank's story - lost his father early, grew up with five siblings, tried to help mother by doing odd jobs often with not enough to eat, dabbled in professional baseball when young. That's when the story kicks off. 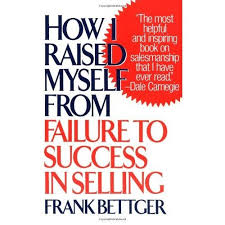 While playing professional football at 175 $ a week Frank is dropped one day by his coach who feels he has no energy and that he is lazy (something I have been accused of too so that made my ears perk up). Frank is appalled at the accusation and says he is plain nervous. The coach tells him that he is better off if he put some life and enthusiasm into his work. Frank is shattered at this turn of events and goes back home to join a league there for 25 USD a week. On the first day Frank decided to act enthusiastic, that no one would accuse him of not being enthusiastic, and since it is a whole new bunch of people he could do that. He decided he would be "the most enthusiastic player" that day. Frank went and acted like the most enthusiastic player and really caught everyone's eye. At the end of that experience he realised that he could 1) overcome his fear with his enthusiasm 2) that his enthusiasm seeped into others and 3) that he felt even better after putting in all that energy. What's better - he was called 'Pep' Bettger and was written about in the local news for his energy. His income also went up from 25 $ to 185$.

An unfortunate injury set back Frank's baseball ambitions. He then took up up selling life insurance and failed miserably. When he is resigned to go back to low paying manual jobs he signs up for a public speaking course by Dale Carnegie and hears those words again. 'Are you interested in what you are saying? Put some  life and enthusiasm into what you are saying.' Bettger sees Dale get so enthusiastic in his own talk that he throws a chair at the wall and breaks one of its legs. Bettger realises that his old problem that threatened his baseball career has surfaced again.

Another year we've just passed through
What new ideas came to you?
How many big things did you do?

Time...left twelve fresh months in your care
How many of them did you share
With opportunity and dare
Again where you so often missed?

We do not find you on the list of Makers Good
Explain the fact!
Ah no, twas not the chance you lacked!
As usual you failed to act!

In another instance Frank hears the Chairman of the company he works for speaking to his executives and these words stick to his mind.
"...selling is about one thing...seeing the people. Any man who can tell his story to 4-5 people, can't but help making good in his life.'

Inspired, Frank decided to keep a record of his calls to maintain the 4-5 average. As he analysed his records he figured he could make more calls. As he implemented his plan of seeing 4-5 people every day his sales went to $51000 in 10 weeks. One year later he analysed his records and found that he had made 1849 calls, conducted 828 interviews and closed 65 sales resulting in 4251 $ as commission. Further analysis revealed that he closed 70% sales on the first call, 32% on the second call and 7% on the third. But the best insight came when he realised he was spending 50% time on the 7%. He dropped the 7% and focused on the first two. The income per call went up from 2.80 to 4.27 $.
Sales is the easiest thing to do is you work hard at it he says. Frank set a target of 2000 calls per annum, 40 per week. To better organise himself he started a self -organisation day to plan ahead. Soon he was only working 4 days with his better planning. Analysis needs thinking, Organisation needs prioritising.

"Men do everything but to things...Think and do things in order of importance." - Henry L Doherty

Frank kept a weekly time table - morning, lunch, afternoon and evening. He kept index cards. He talks of how important the weekly work sheets were to IBM. He advises to set aside a day for self organisation day to properly plan the hours.

Other fine advise that Frank gives is that sales is about 'finding about what people want and helping them get it.' He urges salesmen to attend as many sales conventions as possible.

To get people to work he says "when you show a man what he wants, he will move heaven and earth to get it. There is only one way to get anybody to do anything - making them want to do it."

Some quick tips - Help the customer recognise what he wants and help him decide how to get it. See things from the other person's point of view and talk in terms of his wants, needs and desires. Ask questions. Find out what is the basic need? What is the most important point of interest? Decide on the main point of the interview and stick to it. Frank says something that we all woke up to now - the important of the three letter word Why? He says its the most important word in selling. I suppose it helps the customer connect to his why. It's a question one must ask everywhere I guess. Frank also says that a man has two reasons - one that sounds good and the real one. Another important aspect of selling is the art of listening or rather creative listening. Its the magic element in selling he says.

Frank's checklist is - make appointments, be prepared, identify the key issues, ask questions, explode one big idea, arouse fear, create confidence, be an assistant to the buyer, give honest appreciation, assume a close, out THEM in the interview.

Deserve the confidence that the customer places in you. Know your business and keep learning. Praise your competitors. Look your best. Make understatements. Do you first believe what you are selling? Speak no ill of anyone. Let the customer demonstrate and make the sale. Never forget a customer and never let the customer forget you. If you take care of the customer the customer will take care of you. Love his property. New customers are the best source of new business. Follow up on a new lead within 6 minutes (asap). Report results of your follow up on the lead.

Before going into ton interview he says tell yourself - this is going to be the best interview I ever had.

A quick summary of his techniques.

To win a man convince him that you're his friend. Encourage young ones and help a man see how you can be a success in life. Ask people about their greatest ambitions. And if anyone has inspired you, tell them. Smile from deep down inside. If nervous admit you're scared. Let them help you.

I loved the chapter on enthusiasm. I will infuse that in my life.straight away. I also liked the organization bit and the record keeping bit. Just the same routines again and again will lead you to success. Everything he says is so relevant and encompasses so many areas of our life. Frank obviously is as relevant or more now as he was then.
Posted by Harimohan at 10:08 AM