This was an interesting book I found in the a pile of books. Written and published in the 1970s (it's priced at Rs. 5), it is an account of a common man's journey towards self realisation. Originally written in Marathi, it was translated into English by Dr. V.R. Nargundkar. My takeaway from it - to achieve the highest states one must be happy. 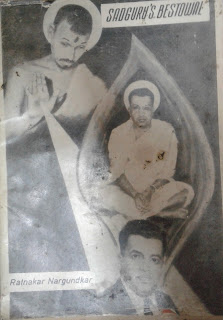 Ratnakar Nargundkar, while having ordinary moorings, certainly had a bent of mind for the spiritual. He would seek out holy men, seek the path to self-realisation and so on. A desire to find a sadguru true guru), to meet astrologers were inherent in him. This is the journey to self realisation achieved by Ratnakar with the guidance of his guru Param Sadguru Shree Gajanan Maharaj of Akkalkot.

Ratnakar refers to his guru as Shree, in a very affectionate manner. He finds his guru after meeting and following a few other gurus and their paths. Through Shree he finds eternal happiness or Brahmananda, a state achieved only through Nirvikalpa Samadhi state. In 1964 he is introduced to the method or sadhana which includes knowing the mantra, knowing the right facial expressions and visual concentration. Ratnakar's journey takes seven years from 1964 - 1971, a period during which he has visions, acquires supernatural powers and glimpses of the possibility. His gurus lead him along the way, through direct guidance and many times through appearances in his dreams. Ratnakar divides his time at Akkalot and at his place of residence Belgaum.

The state of self realisation is one which he calls the ultimate state - one where he feels no hunger, thirst, desire, wishes, happiness, sorrow and other human functions. It keeps him eternally happy in the state of Brahmananda which is considered 100 times happier than Prajapati's pleasure. This state can only be experienced in Nirvikalpa Samadhi. For this he is guided with a mudra, concentration, meditation and a mantra. He is assured that he will be protected. That he should concentrate on the tip of his nose at all times, effortlessly.

He is told to keep the sadhana secret as it makes it more powerful. An interesting story is that Shree shows him that anyone can reach that state and he demonstrates it by keeping a live mouse in vajrasana for 36 hours - it loses its desire, hunger and thirst and sits in that state for  36 hours.

Ratnakar recounts incidents of how he was saved from accidents, illness and how he believed he was under the guru's grace all through. They purified his nadis, and led him through the 7 stages of knowledge to the avdhoot stage where one cannot slip back. He also advises others who wish to attain self-relaisation to read a book titled 'Grace Alone' which has more details.

It is a fascinating account of one man and his search for self realisation and how he attains it. I just got a few glimpses of the state. One take away - be happy. Very interesting indeed.
Posted by Harimohan at 10:49 PM

Wer can i get this book.. Plz help

You can get this book at Belgavi in Karnataka state in India. His son Girishji resides there and sale this book

Please I live in Lima, Peru. Very difficult to get this book for me, however the circumstances in which I have found this post are not to be taken lightly, I find it a fascinating and wonderful syncrodestiny experience.

If anyone can assist me please in getting that book in any way not only will It be a huge blessing for everyone.... thank you so kindly my email is humano1@yahoo.com

I am from kerala... Can you give his phone number... Or any adress like email...

This Epic Book Sadguru's Bestowal is availabl. We have a few copies. send email to: sunlightpath@protonmail.come

That's brilliant. I am sure whoever is keen will reach out to you.