My mom, Kalabathula Savithri, eldest daughter of Kalabathula Venkayya, hailed from a tiny village called Padmanabha Cheruvu in West Godavari district. Her father was a respected government school teacher I was told. Her mother was the gentle and beautiful Sastrulamma. She had a sister too. Mom went to school and I always thought she discontinued after her 5th class. But I found a Teacher's Certificate certifying that she passed the Training School Leaving Certificate Exam in March 1948 (she was born on January 18, 1932) which means she was sixteen when she passed out as a teacher. She studied at the Government Secondary and Training School for Women, Narsapur and had passed out with 48%. G. Cattell was the Headmistress who signed the certificate with her beautiful handwriting. Mom signed in Telugu.
The Headmistress's impression of her was "Very reliable, mild and pleasant. Takes corrections very well. Takes the initiative. A very fair teacher.' - signed on April 9, 1948. Pretty accurate.
Turns out Mom and other trainees were tested in Physical Education (7 steps, 7 jumps, 7 hops, 7 skips, 7 rope skips, 7 ball throws, 50 yard run) in organised games and gymnastics - average. Then they were tested on handicrafts (very fair), character and conduct (v good). 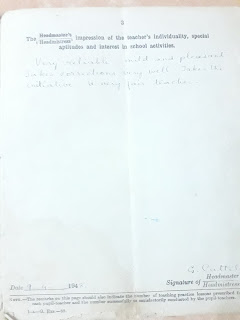 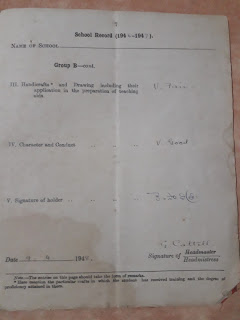 'Shows keen interest, very regular and improved, calm and cheerful, tries to do well' are other comments. She was pretty good with her attendance.
Mom must have been pretty young when she married my father who was a full-fledged Engineer from the Guindy Engineering College, a voracious reader, with a finely acquired taste in music and a much wider world view than she could ever have. But from what I saw of her since the first memory of her, she never let her lack of education (I always thought she had studied only till her 5th until I found this certificate - how little we know of our own) get in the way. She always operated as an equal - be it with the Collector of the district, a Minster or even an actress. She had a presence, dignity and a strong character that made people of much higher status and standing respect her immensely.

For example, her best friends were all highly qualified doctors - Dr. Savithri, Dr. Satyabhama, Dr. Sita, Dr. Ranganayakulu - and they would come miles, travel between towns if she needed them. I spoke to Dr. Savithri recently when she came home for Anjali's birthday and asked her how they got along considering the disparity in their education and she said without batting an eye lid. 'She had common sense which we did not have. Imagine how she handled life after your Dad's death. No one could have done it but she.' True. I never felt the lack ever in the years after Dad passed away.
I don't think Mom lost a friend ever, lost a relationship ever. The vaguest people remember her. Two years ago (more than ten years after her death) when I went to register my gas connection (with the Aadhaar) the clerk in the HP office looked up when he saw our address. 'How is madam?' he asked. I was surprised. 'What madam?' I asked. "Your mother," he said, "I can never forget her voice over the phone. There was something warm, affectionate and kind. She'd call when you needed a gas. Always made me feel special." Wow. That was something. The butcher remembers her, the Binny retail shop fellow remembers her, the grocery shop wala remembers her, the vegetable vendor who pushes his cart remembers her - and not just normally - with true affection and respect. Mom I think had this wonderful way of making people feel special, feel cared for. They connected to her and stuck to her for life and even after. From peons to drivers, officials to highly qualified people, they all remained forever faithful to her. There was a shop in Eluru which would send her whatever sarees she wanted without her payment for years after we moved out.

There was a small coterie of uncles and nephews who could kill for her. They'd be in a huddle, conspiring with her, on what was to be done and more often then not did the right thing. They would materialise overnight at our doorstep - all she had to do was summon them and they'd come without delay, without a question. Left to my father's planning we would have been homeless and probably educationless by now. It was she who realised that father's service was dwindling and there were five children, three of them daughters who had to be married and two young sons still in school and got him to build a home. A home that she oversaw personally while it was being built, incorporating designs she saw in Chandamama or some other magazines and coaxing the workers, masons, carpenters, to give her their best work. And they all would have died to do it for her. The same home gave me the comfort to take a decision to write.
She remembered every little thing - birthdays, anniversaries and made appropriate gestures. Always something appropriate, big or small. Definitely a telegram would go if she could not attend. Money would go for those who needed it even if her own position was not the strongest. Clothes, gifts..somehow she knew what they needed and got exactly that. She'd be there physically for them when they needed her. All of which was amazing considering her background.

She had this amazing curiosity and willingness to learn. She hired a school teacher L.T. Ramasarma to teach her English when we were in Eluru (early 70s) and learned enough to sign and read and write. This when I was five, and I remember later reading the books she was learning to read - The Trojan Horse was one and some other fine books. She loved good cinema and I enjoyed watching 'Ankhiyon Ke Jharonkhen Se' with her. She enjoyed music, flowers, her little garden.

Mom had this tremendous clarity and strength. Once she decided on her course of action she would not think twice about doing it. There was apparently once an issue when my father was threatened by some supposed-naxals to pay them money. She chanced upon their note, called the Police Chief of that district and sorted it out overnight. My father had been struggling with the issue for a long time.

Mom and I planned on a trip to Kanyakumari and Varanasi which we never did. But I am glad I coaxed her to make the US trip to meet my cousins - all alone. She did, mustering all her courage and making a foreign trip by herself. I am so glad she went though at the last moment at the Bombay airport, she very cutely, asked me if we could cancel the trip and go home. I told her they would take care of her. She was nervous but nothing can stop Mom.
When she finally fell sick with colon cancer in 2000-01, I was fortunate to be there to hold her through that period. We'd talk so much during those hospital visits and she'd tell me all the things that happened - my father's lack of financial prudence, how she was told there were things called banks when she was well into her forties and how she then planned her finances, We'd sit in the little canteen in St. Theresa's and I'd listen to her stories as she told me in that quiet, amused and measured manner. I once told her to write about her life and she wrote two paras - two paras of the most beautiful prose I have ever read in Telugu. She described the route to her school, the flowers, the little birds, the skies - just blew my heart away. I wish she'd written some more.
It was a tough period during her illness as she slowly sank and the pain increased and she lost her faculties. But it was time for the family to rally around and everyone came, siblings, nephews, nieces, uncles, aunts. Ram came down from Bombay and he was a huge help in that situation which was fast threatening to go beyond my control. Mom finally passed away on January 13, 2002.

On my birthday she's always give me a hug, a kiss and an apple. Maybe even a card and a chocolate sometimes, but this was a must. It was such a warm beginning to the day. Of course she worried about me and would wonder how I'd get by with my text book ideals about life and narrow inflexible boundaries. I'd laugh and then she'd laugh too. Never in her wildest dreams would she have imagined that I would turn into a writer and Ram into a film producer and director. But knowing her she would be pleased as punch to know we are doing things we love.
She gave us so much freedom and we never abused it. I'd come home at 2 or 3 in the morning during college days. She never said do this or that. She let us choose and we turned out ok. She'd consult all the right people though to help. She'd have her army of astrologers and pujaris (who still ask after her) and try to sort out my stars and that of the others.
For her background she knew enough about nutrition or figured it out. During my playing days I'd leave home at 6 in the bus, go to Gymkhana play till 930, go to Osmania and attend classes till 1, take a bus back to Gymkhana and eat a pastry or a puff before heading into a three hour practice. Once Chakkar caught me eating a pastry and he made such an issue of it - 'This is the diet of a Ranji Trophy player'. I never thought of carrying a dabba thanks to the long time gaps, but Mom set me up for the day with a double egg and a couple of solid chapathis. I can still taste them, feel the strength they provided me to get through those days.

I used to call my siblings and celebrate it earlier but today I felt like being alone with the thought. I remember buying her a remote controlled television as a birthday gift for her in her later years - smuggling it into the home after she slept (one of the few gifts I bought with some thought, one of the few surprises I planned in my life). She was so happy with it - else she had to walk up to it and change the channels. I somehow wonder what all I could have learned from her if she was around now, when I am a bit out of the fog and clearer. I could have had long discussions, taken her advise and surely profited from it. I could have learned how to invest, to plan, to deal with things. How to make friends and keep them for life. She would have loved having Anjali around and Anjali would have likewise. She had a conspiratorial relationship with Shobha too and I can easily see what they would have planned together to counter my bull headedness.

There's so much more of course and I will probably write again but for now Mom, Happy Birthday. Thanks for giving us a good life. And all those apples.
Posted by Harimohan at 9:12 PM

Glad that your mother didn't stop you from doing whatever you wanted to do ... and glad that you chose to write ... this post is your best gift to her ...