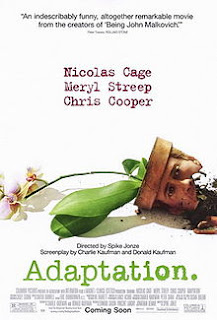 The original book 'The Orchid Thief' is written by Susan Orlean. It's given to Charlie Kaufman, real screenplay writer of the movie (played by Nicholas Cage), who has a twin brother Donald (NC again). Now both are writers - Charlie is an established writer - but he does not have a great self image of himself. Donald meanwhile is moving faster with the women, joins Robert McKee's seminars and writes a thriller that Charlie does not like at all. Donald sells his book idea for a huge sum too. Charlie goes to meet Susan, chickens out, and sends Donald instead to interview her instead. Donald returns convinced that she is not genuine. They tag her to Florida and catch her with her lover La Roche, the protagonist of the book. Susan catches Charlie spying on her, decides he must die. In the end Donald dies, La Roche is eaten by an alligator, Susan goes to jail and Charlie finishes his script.

It moves at different paces at different times. Interesting to see how fact ad fiction have been woven into the story. The ending with all that gore was probably not necessary - or I missed something. A bit tiresome but watchable. Especially if you're a writer. I liked the little parts with McKee, like a sneak peek into his seminars.
Posted by Harimohan at 12:43 PM