Am watching this wonderful film again but this time I had Anjali for company and so had access to some more viewer reactions. Though I saw the movie only about four years ago, it seemed very different this time. 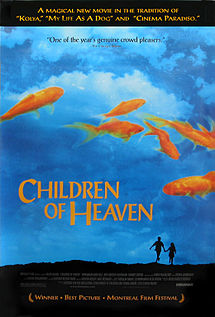 The conflict is between what is necessary to survive and how it is constantly threatened. In this case two siblings, a brother Ali (9 years) and a sister Zahra (7 perhaps), from a poor family, try to survive on one pair of shoes between them. The girl's shoes have been lost by the brother accidentally and they dare not tell their father because he is struggling financially anyway and is behind rent already. To add to their woes their mother is ill and has just had a baby. To keep things going the boy agrees to lend her his sneakers - out sized and dirty - if she comes quickly from school and gives it back to him so he can go to school after. The kids race through Teheran's interior roads as they try to make do with the one pair of sneakers between them. Until one day the boy enters a competition because the third prize winner gets a pair of sneakers. He promises to win those sneakers for his sister but however hard he tries to come third, Ali comes first, and is disconsolate! His school director and physical instructor are very happy though.

The scene where the father earns good money on his gardening project and instantly starts planning all the things he wants to buy - and how he somehow loses it all because he cannot handle the money and conjures an accident is pure genius. Some people just cannot hold money and lose every bit of what they think they do not deserve. The other scene is when Zahra discovers her lost shoes - on another school girl's feet and takes Ali to confront her. But when they notice from a distance that the girl's father is blind, they return without confronting. Zahra's anger later when she realises her acrifice went in vain because the other girl's father bought her new shoes is brilliant. 'Why did you give them away?' she screams, instead of giving them back to me! It suddenly struck me that the young boy was good at running because of all the running he and his sister did. But sneakers or not, the end is happy with the kids playing near the water blowing bubbles, and the father bringing them stuff from the market including shoes for the girl. Beautiful!

Posted by Harimohan at 4:35 PM