Today i saw a movie called Tarsan. a little boy was rescued by a mother mountain gorilla ,Every one was glad to see him exept Clindo the  angrest  gorilla he said in a deep voice'he can't stay he's different But the lady gorilla would not give up'HE CAN she  yelled at him Fine  Clindo said but it doesn't mean he's your son.That night tarsan  went to mom and said'Why am i different? mom said 'Well i see two eyes like mine i see  two ears like mine  i see.... what else two hands said Tarsan  but he still frowned mom  put her hands under his chin and then put his  hand on his heart and said'What do you feel? My heart he said then she put his hand on her heart tarzan  said Your heart 'See,We,re  the same Tarzan said I'll be the best son. He said and then started learning with his brother and friends.When he grew up he meets a girl named Jane.he lears alot from her,her dad and her freind . 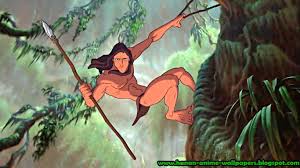 (Anjali got tired and her hands started aching, so I was asked to type from here on.)

One day he heard she  was leaving. Tarzan said to Jane's friend "Jane stay if show gorilla?'
'Yes," he says.
He takes Jane and shows her his family. Clindo comes and tries to hit them. Tarzan tries and stops Clindo.
By the time Jane, her Dad and her friend go away. Clindo says I allowed you here to protect us and you betrayed us. Weeping Tarzan goes out of the place.
Later on his mother says, "I want to show you something that I should have shown you long ago". She takes Tarzan to a hut in the forest and she asks him to enter. Inside he finds the picture of a man, a woman and a baby boy.
He asks his mother, "Is that me?"
"Yes," she says in a very low voice.
Then she goes out and says, "Tarzan whatever you choose I just want you to be happy."
Tarzan dresses up like a businessman and comes out. His mother starts crying.
Tarzan says, "Wherever in the world I am, you will be my mother."
Posted by Harimohan at 7:21 PM

Bravo Anjali...that's a very nice account of Tarsan...and your narrative has brought Tarsan to life...thanks dear...and Hari, you are a great dad...

Thanks Jai. You're a great visitor to have. Cheers.