There was something about this incident and the way it happened. I think it deserves a mention for many reasons, one of which being the way it turned out.

Rajan Bala had been ailing I knew, but he was also writing his book 'Days Well Spent'. He was planning its launch in Bangalore and in Mumbai. I planned to attend both. But two months before the launch, Rajan Bala passed away suddenly.
The launch at Mumbai was still on. The date was fixed - November 30, 2009. I had decided to go to the launch come what may. So I booked my ticket and went to participate and show my gratitude to Mr. Bala.

I met Sanjay Rajan and some of the other friends, Chokappan and Aditya, on the morning of the launch at the CCI. They told me that Sanjay Manjrekar was to be the chief guest, Rahul Dravid had agreed to come and many friends of Rajan Bala would be present.

I went home and got a thought - why don't I prepare a speech in case I get an opportunity so I can share my perspective of his life and writing. So I sat down and wrote down my speech and prepared just as if I were to speak on the dais for a good two hours.
Imagine my surprise when Sanjay Rajan asked me, as I walked into CCI that evening, if I would share the dais with Sanjay Manjrekar and the others, and speak about the Rajan Bala I knew. I knew Sanjay Manjrekar as a person who had been kind enough to humour me to be my chief guest when I launched 'The Men Within' in Mumbai in 2007 and one of the best batsmen I had bowled to so I was glad to be on the dais with him again. I had met Rahul at Hyderabad a while ago and he was one of the most pleasing and down-to-earth people I ever met.

As the event started I could see Cyrus Broacha seated upfront, Harsha Bhogle standing at a distant door listening in and paying his respects to the great writer quietly, many journalist friends and cricketers. Rahul Dravid came in from the nets (the Indian team was practising out there) and politely indicated that he would participate in the proceedings from the front row.

Satya spoke emotionally. The publisher Theo Braganza of Marine Sports spoke. My turn came. I informed the audience that I had written it down for a specific purpose - to put his writing in context - and hence would read my speech out. I did not want to miss a thing.

And I read it out.
To this day I wonder what made me prepare that speech when I was not even sure of being present in the hall. There's something to the power of thinking ahead, of living life as if it has already granted you your wish. Anyway, the text of the speech. 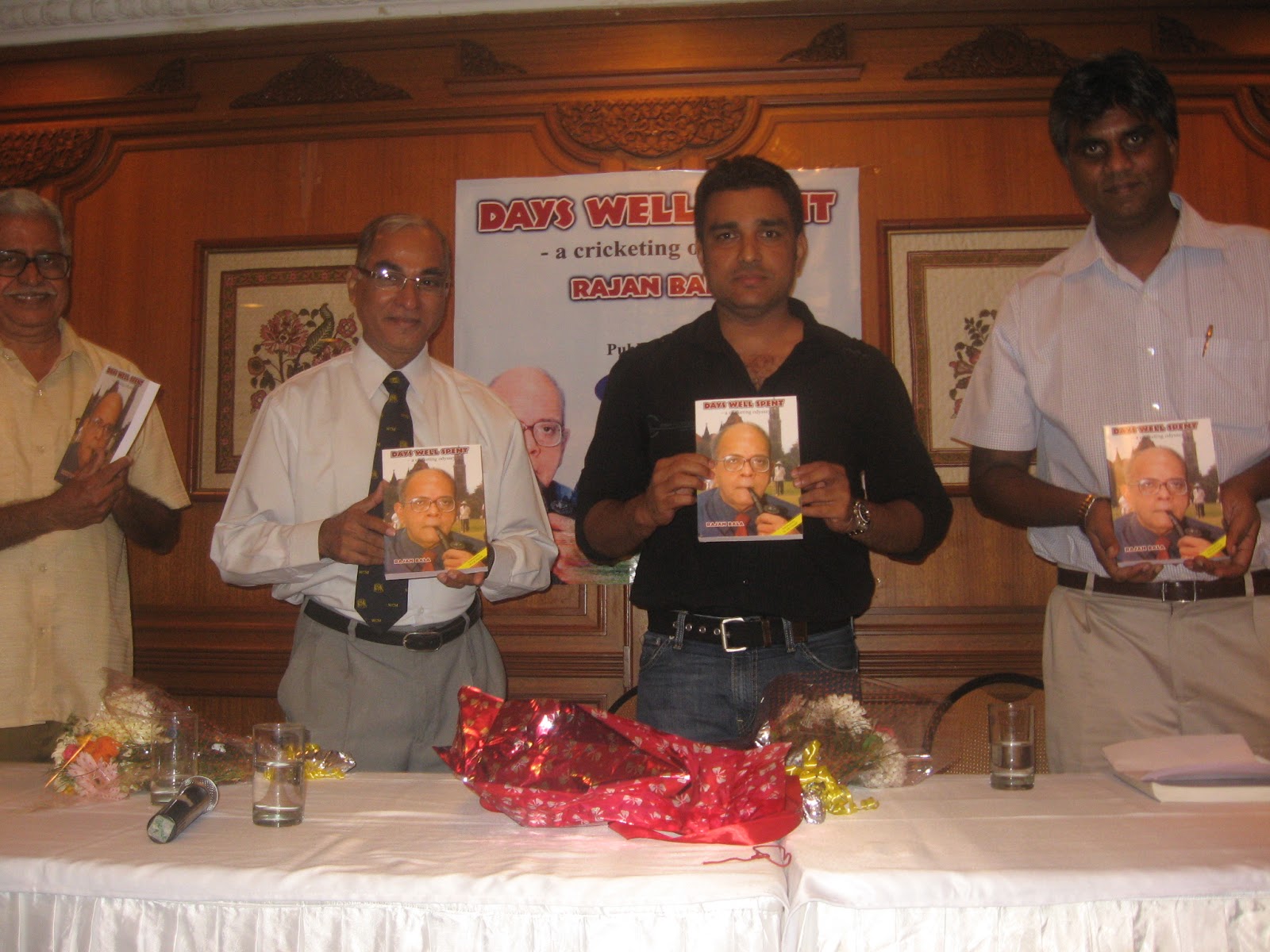 "Calling Rajan Bala a cricket writer would be as foolish as calling a warrior king like Bheeshma a sharpshooter. His knowledge, his understanding and most importantly the application of this understanding to life was effortless.


Personally, I am glad he chose to express himself through cricket because it made a difference to me. I will tell you the story of how Rajan Bala made an impact in the life of a young boy from Andhra far removed from these high temples of cricket.

I was born in the late 60s in an ordinary, middle-class family and grew up on all kinds of games and stories and literature. As I grew older and I started looking for heroes to emulate, my confused mind noticed the pages in the Hindu filling up with a delightful copy of the game of cricket. Exquisitely crafted phrases, heart-stopping descriptions of the game, the sheer poetry made me put the paper down and dance away practising the straight drive or a cover drive. Dreams were stoked, desire fuelled. Purely on the power of the pen, of the print media, I got drawn into this love affair completely that I could never get out of it. I was inspired to play the game to the first-class level. More importantly, the thought and scale it could soar to never left me.


What he did was that he set it up beautifully for ordinary people like me to understand the game through words, emotions and feelings that not just described the game but also set it in context. How a strategy could make sense not just in the game but in war, how a player represents not himself as one isolated incident but as a soul of another warrior of another time from the clutches of history, war, religion, movies, literature, sports and even poetry. Those words, those descriptions made heroes larger than life for people like me, inspired me in days when it was dark...gave me a framework of excellence to aspire to because cricket was something I could relate to as a youngster. If I was to pick one humongous contribution Rajan Bala made, this would be it, that he made a difference to ordinary people like me, by setting up this wonderful game bare in all its complexities and textures and showed it for what it was worth – that it represents life itself. From the hunger on the street to the high life. In my mind today there is no doubt that it is this difference that propelled the game through ahead of the other games and sports – I never remember reading too much of such other sports news in the sports columns.


The second thing about Rajan’s contribution was that he executed his job with great responsibility that he assumed all by himself. To classify his writings as cricket writing would be another great folly. If you notice his body of work he has with great care chronicled the history of Indian cricket in ‘The covers off’, an incredibly racy reading with such definite analysis on how the game grew in India and why. ‘No one need to document Indian cricket till 2004 son,’ he declared to me. ‘I have done it. Now, whoever does it can begin from there. I have documented all my thoughts, notes and interviews in that book.’ He said it with absolute relish.


Then he put his neck on the line by penning a book on technique – Glances of perfection - I cannot imagine what courage someone could have to write about the high technique and challenge and destroy one’s own stature by opening oneself up to the public on such a precise area. In India when everything is questioned about the game, surprisingly little discussion was noticed on that book where he stirred up sufficient thought, obviously because it was in the realm of the perfectionists, the experts.


Sanjay, Rahul are thought leaders - responsible and insightful and it is on them that this responsibility also falls to discuss, dissect and throw open what he started. In fact, Rahul does not appear in the book and I was shocked when I first read it – now I understand how deliberate a ploy it could have been, how only a Rajan Bala could conceive such a scandalous gap. It is obvious now that that the ball now lies in the court of the exponents to explain why Rajan was right or wrong, and we all know that there is no one better than Rahul to take up the job and explain. Rajan would love to be corrected and the game must benefit.


When technology came in he chose to work from behind the scenes. The current book ‘Days well spent’ is an example of that. I know he wrote it in three months. I am the proud owner of the manuscript of ‘The days well spent’ which he signed for me and wrote ‘perhaps the only copy of the manuscript after I am gone’. It is as racy as a bestselling fiction book to me. Read it and you will know how well he has integrated the game with literature, history, culture, society, people, nations and even the world. Which is why I say, that to call him a cricket writer alone would be a great folly – he was a thought leader of the highest quality.


I see some wonderful cricket writing talent in this country, I urge them to take up what he left unfinished and elevate thought levels higher. Cricket can unify and can make a much larger and more impactful difference to lives in our country in ways we cannot conceive. Today the boy from Andhra is consumed with the idea of using cricket as a metaphor to increase productivity across India by a mere 5%. If I achieve 1% my job is done. Thanks to Rajan and the fantasies he fuelled.


The game will always be bigger and he knew it in his infinite wisdom. We can only express it through ourselves to the extent we can and that is our limitation as mortals. For those who understood it, he was gentle. For those who did not, he had no patience. He never suffered fools. The controversies, the mischievous questions, the outrageous comments or statements were required to prod thought and he took that responsibility. It not only requires clarity, it requires great love.


My association with him was brief, in the past two years only. When I launched my cricket novel in 2007, I hesitantly I approached Rajan Bala. He gave me a wonderful review and let me enter his heart and his house.


Two things stay with me. His delight at a discussion on cricket, the intensity with which he spoke about it late into the night to a strange young man with a modest achievement in both cricket and writing frightened me sometimes. Is it possible to love something so much I thought, especially when it has given him so little in terms of material benefit. He answered that to me one day, I love talking cricket son, any day. Come.


Another thing was that all through his dark days with his illness during which I spoke and met him often, he never resented anything, never uttered a word against anyone and marched on sending article after article, week after week, till the last day.


Last I spoke to him in September, he said, we’ll meet at the book launch son and we’ll celebrate. I am here Rajan Bala. Let us celebrate with all these wonderful people who love you. Cheers. And thank you for everything."
Posted by Harimohan at 1:21 AM

good one..and a great guy, though I met him only once.

Thanks Raja. That he was.