Watched a highly energetic and entertaining performance by the Wadali brothers, Padmashri Ustad Puranchand and Ustad Pyarelal, at the picturesque Chowmahalla palace last night thanks to Sagar who came up with the idea. Their concert was part of the Pandit Motiram Pandit Maniram Sangeet Samaroh which has been organized by Pandit Jasraj for over four decades in Hyderabad now in memory of his father Pandit Motiram and his older brother Pandit Maniram.

Pandit Jasraj, though originally born in Haryana, spent his childhood in Hyderabad. His father Pandit Motiram died in Hyderabad (his Samadhi is here) hours before he was to be appointed the royal musician for the last Nizam Mir Osman Ali Khan. The samaroh coincides with the death anniversary of Pandit Motiram on November 30. The samaroh has been organized for the last four decades now and has introduced Amjad Ali Khan and Zakir Hussain who played here in 1972. The Wadali brothers event was also part of the samaroh's activities at bringing music to the people and promoting young talent and that part called Jalsa, is spearheaded by Pandit Jasraj's daughter Durga Jasraj who helmed the affairs yesterday.
The setting was divine. Thought there was some confusion about the requirement of passes when the website indicated that entry was free, we were let in. We secured decent seats up front and watched the first of the young winners perform, R. Mridula followed by Abhinav Kulkani, both of whom sang exceptionally well. 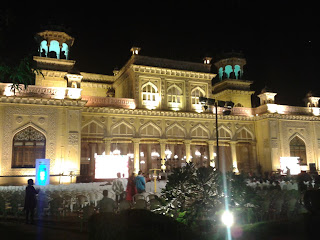 Then at 915 pm came the Wadali brothers in all humility, eyes shining and twinkling, hands folded in gratitude and pleasure at performing before Pandit Jasraj. After the initial welcome and shawls etc they began their performance and held fort almost until midnight, singing so energetically and so wonderfully that I lost account of time. The masters draw you into the act, their energy, and you can find yourself lost in a thoughtless space, and that is the power they have. As they wove stories and told them with all the mastery of expert story tellers, laughing at the foolishness of man, praising the oneness of god, equating god and love, speaking of the power of belief, pointing out the insignificance of man before creation, the sufi masters combined fine art, great singing, sufi wisdom, and made the two and a half hours rich in so many ways. If the music held the audience spellbound, the stories had everyone nodding their heads and laughing at the follies of mankind. And to top it all their constant plea that they know nothing, that they have learned a bit form the masters like Pandit Jasraj, and that they can only try to hum a few lines, that they have only come to mark their attendance to the crowd was so genuinely borne out of humility. It was not just the music, it was the entire persona, their rustic charm, their deep devotion to their art, their constant quest to seek (music is such a thing that by the time we realize we are finally learning something, our lives are over). 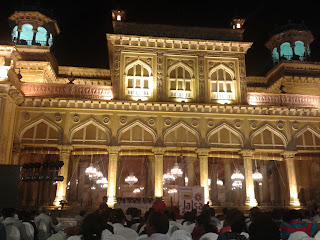 The story of the Wadali brothers (they come from a village in Punjab called Guru ki Wadali) is very unusual. Though they came from a family of musicians (they are the fifth generation of musicians) they chose different professions - the older brother Puranchand was a wrestler for over 25 years and the younger one Pyarelal played Lord Krishna in the rasleela programs. Their father forced Puranchand to learn music and he learned from eminent musicians of the Patiala gharana including Bade Ghulam Ali Khan. Puranchand taught his younger brother and mentored him. They teach music for free for deserving students who can preserve their music, have few recordings, and have only recently sang for a few films. Together they are dynamite, the older and softer Puranchand with a distinct voice and its many subtleties and the highly energetic and robust voice of Pyarelal - they cut in and out of each other's singing with effortless ease. And they never stopped having fun right till the end.

Wonderful stuff and an evening well spent. The crowd was packed to capacity and few left even at 1130. Great show and a big thank you to Jalsa, Pandit Motiram Pandit Maniram sangeet samaroh and all those involved.
Posted by Harimohan at 12:27 PM