And now its time to let the moment sink in. After almost two years of slogging with the script and a bunch of new and untested artistes and technicians, Ram (my brother) can finally put up his feet and smile. I just read a lovely review in The Hindu by Sangeeta Devi Dundoo - its just perfect. Not a word too much, not a word too little, got all the right things and I am so glad she said it like it is.

Phrases like 'return to innocence..' or '..a thin line divides a small, beautiful film from a boring one..' and 'director Virinchi Varma walks the line well...'...'we warm up to the two...' and '...Raj Tarun (the hero) makes us root for him..' are stuff that I'd gladly take any day in a review. 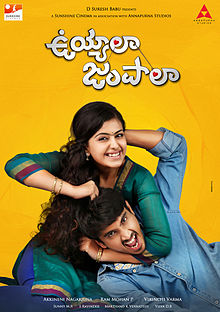 I am even more over the moon at the concluding line that goes '...Uyyala Jampala is an example of what happens when a small film is backed by good producers. The director is able to narrate his story well and get capable actors and technicians on board. and you’re bound to leave with a smile.'

and then '...Uyyala Jampala is a good way to end the year.'

A few more reviews I saw on the net are available at these links.

Wonderful stuff. It's tough for a producer to work with a completely new set of actors and technicians and I know how much energy goes into mentoring them and getting it right. Sometimes I feel that Ram, is better off not taking the strain of mentoring so many youngsters just because its easier to go with the established and known ones. But see what his effort has brought in for the audiences - from Nani to Srinivas Avasarala who are almost veterans now in the span of five years (I'll leave Swati out because she was already in a league of her own), the young kids of Golconda High School who are all raring to go with the powerhouse of talent they have and now this talented, unassuming, bunch of kids that starts with the director Virinchi Varma and goes down to the immensely talented Raj Tarun and Avika Gor and the many new faces and talents! Fantastic stuff.

A word about Virinchi. I am amazed at how this soft spoken, unassuming young man gets a whole team to work. More so on such subtle themes as the ones he has worked on in this movie 'Uyyala Jampala'. To me it is one of the subtlest love stories ever told and its so difficult to maintain the balance, to get the intensity right at the right moment, and when I see how well its been crafted, I am convinced that this boy has some really fine sensibility, a subtle and rare art of story telling. He will do well to retain that aspect of him. Good work Virinchi and you deserve all praise young man. I loved the way you dealt with such a subtle subject.

Raj Tarun must be seen to appreciate what everyone says of his performances. What starts out in the negative rises as if on a current and soars over the thermals in a performance that belies his age, his experience and his maturity. And I've said it once and will say it again - its all in those eyes of his that seem to make him capable of anything - the ultimate hero quality. The love, the pain, the violence, the mischief. Good job young man. If Nani deserved a huge round of applause for pulling off the rather difficult Rambabu character in 'Ashta Chamma', Raj Tarun follows up brilliantly with a convincing, credible and confident performance and making Suri come alive larger than life.

Great job Ram and team! And all those connected with the movie. I know how many midnight hours have been spent on making this one. After this lovely review, you can all let it soak in and enjoy the moment.
Posted by Harimohan at 1:10 AM