I was walking into the neighbourhood park with Satish early in the morning. He'd got his camera to click some sights around - it's a fancy camera that looks like a friendly machine gun.

The normally sober security guard started from his place even before we reached the gate 'what what what?' he spluttered. 'Where are you going with that? It's not allowed.' It was as if he was under mortal threat.
I could not understand this extreme reaction. By now we were closer to him.

The other security guy piped in.
'What's the purpose?' he asked officially.
'Personal,' I replied equally officially .
'Oh, then its okay,' he said officially. 'We don't allow press people here.'

They gave us a ticket. Nothing printed on it about photography being prohibited. I looked around. No boards prohibiting shooting pictures. I asked them how come they made up this rule themselves when it says nothing anywhere.
'No, we don't allow,' they replied. 'It will not be written anywhere.'

I explained to him that if its not written anywhere they have no right to stop us. How can they stop anyone of the hundreds of walkers inside from shooting pictures with their mobile phones? What is anyone going to shoot here anyway except flowers and trees? Why are they so aggressive and impolite?
They backed off a bit.
On the way out I explained to them that people come to parks for a good experience, not to get yelled at. Most people would have gone back after the first yelling. If there were no rules and they were instructed to do certain things, they were better off asking us politely. They looked a bit sheepish at being lectured. 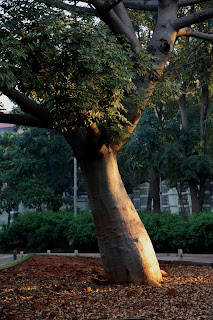 I see this sort of a thing happening too often. I guess one can only point out things to them and explain the right way to do things, the purpose of their being there and the importance of being polite and courteous. It's something we could all do well to learn.
Posted by Harimohan at 4:13 PM

You can say that again. Politeness? Whazzat?