I attended the audio launch of my brother Ram's new movie 'Uyyala Jampala' on Sunday, the fifteenth of December 2013. The posters are out, looking happy and joyful with two young and fresh faces, all enthusiasm and mischief, smiles that pale the sunlight even, a name that catches on quick and fast and its a good start. A closer look at the poster reveals that behind this venture are some of the biggest names in Telugu industry, Annapurna Studios with Nagarjuna and D. Suresh Babu of Suresh productions, coming together to part produce this small, cute looking film by Ram's new production venture, Sunshine Cinemas. That makes one curious enough to go wonder what this movie is all about which augurs well.

Though the young actors Raj Tarun and Anandi a.k.a Avika Gor look like freshers in college and probably are aged appropriately too, they come with loads of talent and preparation and a decent body of work. Avika Gor is the very popular actor in the popular television serial Balika Vadhu which is now being shown in Andhra Pradesh as a Telugu serial. She is a well known and well recognized face in India. Raj Tarun comes with a different kind of a background having made some phenomenal amount of short films and is some kind of a superstar on youtube in the Telugu short film circuit from what I have heard. They are highly reliable actors and bring the right mount of freshness, professionalism and intensity for this story. 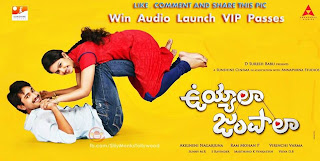 The director Virinchi Varma is a debutant as well and one who has a very subtle style of story telling and film making. I like his sensibility and I think he is one who can find a niche if he sticks to his 'voice' or 'style'. In fact I think Uyyala Jampala is a subtle love story with many wonderful shades of the emotion brought out with all its vulnerability, mischief and fragility. The music director is Sunny Singh and the camera work has been roundly applauded. Many more talented and enthusiastic newcomers, a string of big names and two well received films behind him, 'Ashta Chamma and 'Golconda High School' behind him, Ram's team at Sunshine Cinema gave a preview of what's to come on December 25, 2013 (movie release date) at the audio function.


Shilpa Kala Vedika is a huge auditorium at High Tech City Madhapur and the venue was packed with fans and well wishers. Once inside the show went on smoothly, well compered by two young comperes, Ravi and Lasya. The songs were released one after another by actor Nani, directors Mohan Krishna Indraganti and Ganga Raju Gunnam, actor Sumanth, director Nandini Reddy and Amala Akkineni. There were avs about the people behind the project and in the project, messages, songs sung by the singers, skits and then the curtains drew on a well attended and well organized program.


I liked the first song 'Nijanga...' which is very peppy and has a breezy and feel good feel to it most. Then comes the slow number 'Uyyalaina Jampalaina..' and then 'Mana Bandham' and then the mischievous and rather unusual number 'Lapak Lapak'.


Some more about the movie, some pictures and its producers at this link as well as links to the songs. You can listen to the songs here.
https://www.facebook.com/UyyalaJampalaMovie
They grow on you and I did find the sound new and interesting. I also enjoyed the lyrics by Vasu Valaboju.


The good vibes were there, support from the fraternity and friends, and a good job of compering that kept things lively. This is the third movie from Ram and all of them have been the kind that family audiences can watch, smile and go back feeling warm and fuzzy about life. Much like the chicken soup series, good for the soul, for the health and the heart. The sort I like and endorse, the sort that makes you want to go in and feel good about yourself (and not inadequate and angry). I went with Satish who landed here from Atlanta and got a taste of the Telugu film industry and Ramaraju. Suresh hooked up with me at the venue and we all had a good time before we headed out. Now for the movie release.