Tried this age old trick on Anjali when we had to toss on some issue we were not agreeing with each other on. I tried it with all the confidence of an experienced four and a half decade old hustler conning a six year old. 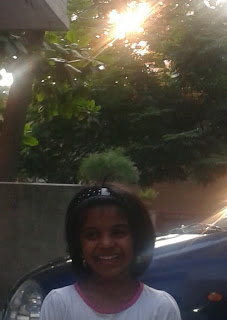 'Ok, we'll toss,' I decreed.
'Ok,' she said, delighted at this new fun game.
I got the coin out. Then the devil got into me.

'Heads I win,' I hustled, showing her the heads. 'Tails you lose.'
She listened and nodded, all trust and innocence.
I paused for a moment.

There was a bit of confusion on her face. Clearly she was thinking beyond 'father' and 'trust'. She did not give the go-ahead. After a moment she spoke.

'I am comfused,' she said (as she says confused these days), her brows furrowed deeply as she tried to get her mind around the one thing that was bothering her.
Something was not right.

Then it hit home and her eyes opened wide.
'Then, how will I win?'

Ah, was I glad I got caught out.

But seriously, you could con me with that trick even now if you had someone in authority play it convincingly on me. Glad Anjali paid heed to her instinct, stopped to think instead of agreeing right away, and figured the con out. Good for you Anjali.
Posted by Harimohan at 5:27 PM