It is so easy to want to mingle with the majority. It's safe and its comforting. But there come the madmen, the misfits, the ones who somehow look different, be different, think different - and by just not being with the crowd they inspire a new thought, a new way of life.

I saw one of those misfits in the park the other day. In a sea of green leaves, shone this golden leaf, all alone. It was as if the Sun had singled it out for special attention as well and it stood out amid all the green ones, proud and straight. 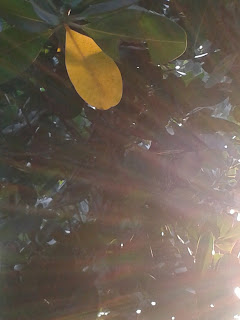 That scene would not have looked half as pretty without that leaf. Like a crown without the big rock. And you wonder what it takes to be that rock, that leaf. The loneliness, the envy, the spotlight - it can get tiring if you think like the other green leaves. But if you accept your role in life and be grateful for it, shine on, because you have been given that part, or because you have chosen that part, you can create that ethereal beauty in a sea of ordinariness. The kind that makes us stop. And think.

To the misfits of the world, the ones who had the courage to be themselves.
Posted by Harimohan at 6:51 PM