Sights on the Morning Run (and some)

The other day I saw this strange sight. A van carrying fish seemed to have dropped some cargo. A couple of people were busy loading the broken crates closest to the pick up van. A little distance behind lay another lot of fish, from the broken crates.

I never saw something like this before. I heard of a time when a truck carrying liquor was involved in an accident and how people raided its contents. Nothing like that happened here - no man or animal went to the fish. The man came and started picking them up. They were not moving.

Vasu and I stopped for a chai at Somajiguda and bang in the middle of the city we see this bull and cow, part of a cattle shed. Vasu told me that the cowherds owned the big buildings on the road front but retained the cattle shed at the back.

I head similar stories in Mumbai - like a pan shop owner outside a huge building at Worli they say owns that land. I am not sure but its quite probable considering Mumbai has some famous beggars who own multiple flats and cars and stuff.

I am amazed at how callous and casual our authorities are when it comes to safety and human life. These days they lay roads with some machines that lay a thick layer of road and leaves a one foot. sharp drop at the edge. Now it lays one side of the road and the other is laid later. Until then the edge is left as it is, open for people to fall off and die. The edge itself is so sharp that even by grazing against it, you'll sustain serious injury. I first saw this in SR Nagar where many must have suffered injuries (my car got stuck there once). The other day I saw it at Chilkur village. Now I had seen this five months ago and it is still the same. I wonder if there are any statistics of people who fell, injured themselves, or even died thanks to this casual manner in which our authorities work. If you ask me, they should pay for it, not just costs but also for negligence. 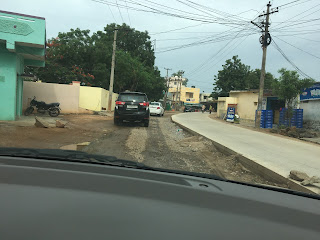 Imagine driving on this road at night and falling off.
Posted by Harimohan at 2:28 PM