Life Lessons for Mastering the Law of Attraction - Book Review

This book was in the pile of books that were designated to go and I flipped through it. It was written in an easy style and had small stories about how people used the Law of Attraction in their lives. I kept it and read it and found some really interesting stories. The law of attraction is pretty simple - like attracts like. What you focus on grows. 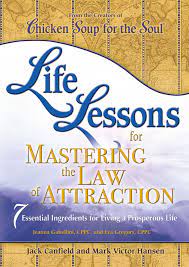 There was this story of this lady who wanted to lose weight and heard the words 'let in slim' - and she imagined herself slim as she let in slim (I guess owning it within her as being separated from her) and she had a lot of fun, lost weight and made money. And the pair who went to the World Cup and found only three entries in the doubles bobsled, saw opportunity and listed, and got a medal. Or the girl who wanted to go to South of France and took a friend's tip and landed up in a place where nothing seemed to go right until a cop rescued her and put her up with his grandma - the perfect place in South France. Or the software company leaking money that started an imaginary prosperity account and started spending form it everyday and added more, until it changed big time.

One person lost all her money and read the 'Science of Getting Rich' and visualised the Million Dollar Experiment - write your intention and repeat it at every chance. She got money and a million dollar home. One of the best one was the one where this lady went down to the last 7 dollars and decided to give it away to the church so she would not feel the burden anymore - and found a 20 dollar bill - which she gave away too. Within four days she got 10000 dollars and within 4 months 50000. She says it happened because she surrendered to the moment. Another one who was a life coach but was not successful and went broke and then hired a coach and dreamed about his ideal life - he changed his business model and became successful. Or the one who suffered a lot due to medical issues and forgave them all and got over all the pain and debt.

Another good one was this lady who was in trouble and she read this book called 'Excuse me your life is waiting'by Lynn Grabhorn which gave a 30 day technique to breakthrough called flip switching. List 30 things you love about you and each time a negative thought comes, flip it with one of these loving thoughts - and it worked for her (I love my hair was her mantra). Another amazing story is the one where the lady had an accident and was due for a painful surgery to straighten her knee and she visualised it all happening the way she wanted and kept repeating it and it -worked!

One who was 35000 dollars in debt and who pretended that there was an endless sum of money each time she spent and it turned things around. The chap who gave free mentoring and then upped it by increasing the value by asking for donations, increasing it to a fixed price and then to a minimum entry fee - and it kept growing - the value he put on himself was what they were willing to pay him. No one values you if you don't. The one who was to sell stuff but decided to goof off and voila, finds the perfect customer - relax and let things happen. She was a fan of the Pray Rain Journal which said that if you wrote a page about what you wanted as if you already had it, by the time you end the book it will be there.

Loved the story of the real estate agent who gets a listing and finds the house vandalised. Instead of giving up and cursing her luck she cleans the place up and sells it that weekend. What's more, a neighbouring lady who sees her clean up gives her many jobs. Another one who is broke who faces the numbers and makes a plan - gets excited and with the new high energy builds a big business. The single mom's housing project of this lady who wrote grants and who suddenly finds the idea - a housing project for single moms - she writes the proposal, gets the grant, makes the money. Cliff Young who ran the Sydney Melbourne Ultra marathon, running 100 miles a day by changing the rules - where everyone slept till 5, he slept till 1 and started running and won - at 62.

Clearly the big thing about money was that it was about giving - you want to get, give. A lady who gets the perfect cruise at her price, against all odds.

Lots of good stuff and some lovely stories that I will not forget. Thanks Jack Canfield and Mark Victor Hansen.

Posted by Harimohan at 8:19 PM