If there's one ability you're missing despite your talent - its this!


E-Canteen Fundas: Believe you deserve it and keep 'em coming

Pro Tip: Along with hard work and the right processes, work on deserve-ability. When you believe you deserve the best and expect it, your capacity to receive good expands 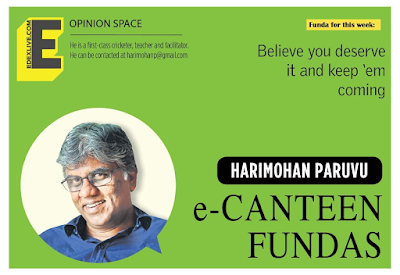 Ankur didn’t get selected for the college basketball team,’ said Rinku. ‘He puts so much effort into his game. He so deserved to be picked.’

‘Manish got selected instead,’ said Rahul. ‘He’s isn’t half as good. He doesn’t deserve to be on the team.’

‘But Manish made it and Ankur didn’t,’ said Rakesh. ‘Which tells us it’s not just skill and hard work. Ankur’s missing an important ability that Manish has.’

‘What is that, bhaiyya?’ asked Rahul.

‘Deserve-ability — your belief about what you deserve,’ said Rakesh. ‘Despite great talent, hard work and doing everything right, if you feel you don’t deserve success, you won’t get it. On the other hand, someone with lesser talent but a stronger belief that he deserves everything, will get it.’

‘How, bhaiyya?’ ‘Because we don’t get what we deserve, we get what we expect,’ said Rakesh.

‘Not getting tickets after waiting in the line, getting the worst seats or others getting ideal partners and then, we’re left with ‘why-does-it-always-happen-to-me’ stories. Familiar?’

‘You’re right,’ said Rinku. ‘Ankur got selected last time but injured himself and missed out. But why would anyone do that?’

‘Bhaiyya, how can we improve our deserve-ability?’ asked Rahul.

‘By expecting the best outcomes in every situation because you deserve it,’ said Rakesh. ‘Change your ‘won’t-happen’ beliefs and selftalk. Act like you deserve the best. Push past your undeserving zone and do little things that make you feel deserving — ask for extra helpings or take the best seats first. Be seen. Be heard. With practice, your deserve-ability improves.’

Pro Tip: Along with hard work and the right processes, work on deserve-ability. When you believe you deserve the best and expect it, your capacity to receive good expands

Posted by Harimohan at 8:58 PM

Glad to know about Deserve-ability. Thanks for writing and sharing this sir :)

Thanks Abhinay. When I first heard this concept I was 40 and it made me think of a lot of things in my life. Ever since its been quite helpful. :)