While Sona is having a good time cooped up inside the house, settling down on bean bags and on beds, watching TV and attending online classes with Anjali on the laptop, Akela and Zor, guard the front yard as they are not allowed inside. But the moment Anjali steps out they attach themselves to her. 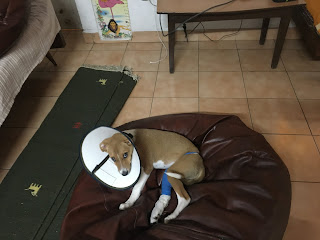 The other day we could not go for a walk because both Akela and Zor insisted on coming with us and we could not risk an attack by the big dogs there. When Anjali and I go out, to school for submissions mostly, Akela comes part of the distance with us, circling the car. I think she figured I am not taking Anjali away so she stopped coming too far.

The other day Anjali went out cycling and Zor, with the fearlessness of youth, ran with her and perhaps got attacked. f course Anjali was there and averted any major damage and so did Akela but Akela became conscious of her territory now.

Today when Anjali set out cycling, they bounced around her (actually Zor did, while Akela went along). But the moment Anjali turned towards the territory of the big dogs (which came out) Akela stopped and started whining, pleading with the impetuous Zor to return. Zor did not, until the big dogs charged and then she bounded back double quick, and Akela stepped in to rescue her.

Anyway Zor returned safe and sound. Some drama all the time!
Posted by Harimohan at 7:32 PM