The Story of Philosophy - Will Durant

More than reviewing the book, which I am incapable of, I should share the context in which I bought this book. Years ago I met my mentor and friend, wonderful writer and ace journalist, Rajan Bala, at the launch of my first book (2007), and we got pretty close. Soon we were talking on a daily basis he would suggest several books for me to read. One among them was The Story of Philosophy which he said was a must-read. I bought the book almost twelve years ago and I remember calling him from Akshara Book Store and asked him if this was the same book he mentioned. Yes, he said, buy it right now. I did. 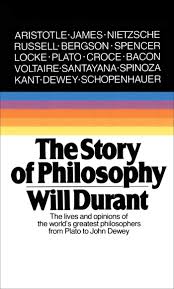 I started reading it many times and could not go past since I found the concepts too heavy and left it after some time. Those were days when I would read every word and make notes etc. After a few tries I decided I should just breeze through it, get a sense of it and then reread it. Even breezing through this book is not a breeze and it took me several months to do that. To remember stuff that made sense I began doing something I normally do not, underline lines in the book.

The book from its index.

- Schopenhauer World as an idea, world as will, the world as evil, wisdom of life, death

Henri Bergson - a revolt against materialism, mind and brain

Some stuff I underlined:

One thing only I know, and that is that I know nothing - Socrates

Philosophy means two things chiefly; to think clearly, which is metaphysics, and to rule wisely, which is politics.

To Plato and Russel mathematics is the indispensable prelude to philosophy and its highest form.

The essence of higher education is the search for ideas.

Philosophy is an active culture, wisdom that mixes with the concrete busyness of life. - Plato

Three things worthwhile in this world - justice, beauty and truth. Justice is the having and doing what is one's own.

Logic means simply, the art and method of correct thinking.

A syllogism is a trio of propositions, the third of which (conclusion) follows from the conceded truth of the other truth.

Now to reread and savour the book again.