All the Light We Cannot See - Anthony Doerr

This book was gifted to me by Abhinay, a Pulitzer Prize winner for fiction for 2015 for Anthony Doerr, a multiple award winner. At 500 pages it appeared daunting but I wanted to read it before the year ended and so I began turning the pages. With short, short chapters of a page or two, it was easily readable and I finished the book in less than a week. 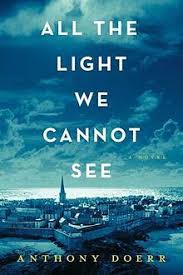 It's structured very interestingly. Two characters, Werner, a German orphan who is good with electronics and radios, a boy with a kind heart, and Marie Laure a blind girl who lives in Paris with her father who is the locksmith for the National Museum of Art, begin the journey in alternating chapters, moving towards one another inexorably. Werner is drafted into the German army before the Second World War while Marie and her father have to flee Paris to safeguard the most valuable item in the museum, a diamond from the Golconda mines that is considered bad luck - but which is very valuable.

The war begins, Germans occupy France, and Marie flees with her father to Saint-Malo, a walled town where her grand uncle Etienne lives in a tall house. Her father makes a model of the city, leaves her in his brother's care and heads off to Paris where he is captured by the Germans. The French resistance to the German occupation begins and Marie and her eccentric uncle send coded messages for the resistance at great danger to themselves. Enter the radio whiz kid Werner who figures that this is the house that is sending messages but he has fallen  hopelessly in love with the blind Marie and rescues her and all that's valuable to her in a final valiant act before he dies stepping on a land mine.

The pointlessness of war, the kindness and courage of people, shines through brilliantly. The relationship between Marie and her father is beautiful just as her relationship with her grand uncle and almost everyone else. So is Werner's relationship with Jutta, his sister, with Frerick his idealistic friend who does not give in despite losing all but his life. The structure, the easy language of the narrative, the clearly etched characters make it a wonderful read. Thanks Abhinay for this super gift.