Every day when I go on my walk I see these dogs in Dahanukar Colony, Pune, peacefully sleeping. The ones in D colony are better fed and it is because many good samaritans feed them continuously. So many biscuits that the dogs just leave them. There are too many dog lovers and dogs around but I got some of them one day. Here they are. 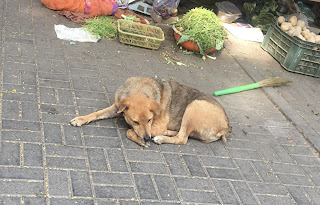 This one was by the place where the general stores and food stores are - lying next to the vegetable vendor in the middle of the road, pondering over the meaning of life. 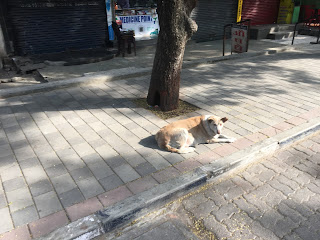 This one is the most favoured canine in the colony I think - I saw one man, bearded, clad in jeans but someone who looked like he had given up his home - lying next to it and feeding it a ton of biscuits. When I passed the dog again after a while, there was a pile of biscuits next to it which it did not touch. It's very well fed as can be seen by the proportion of its body to its head and it generally does not move around. The bearded man I saw, lying peacefully by the footpath, without a care in the world. He seemed to have learned a thing or two from the canine way of life. 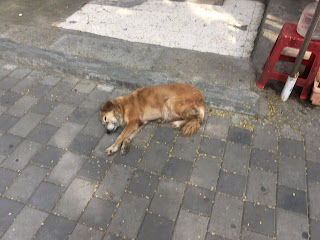 This chap lay blissfully outside the medical shop, aware that commercial activity in Pune starts at its own pace and no one will disturb its morning sleep. Absolutely no care in the world. 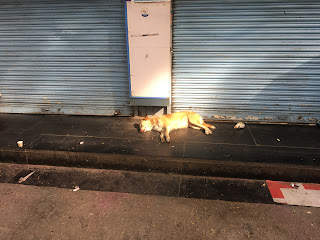 This one chose a nice spot by the shops and it seemed to be touched by the divine, the way the sunlight falls upon it while it luxuriates in its morning dreams. I can only imagine how cosy it must be feeling t 8 in the morning with the November sun, bathing it. 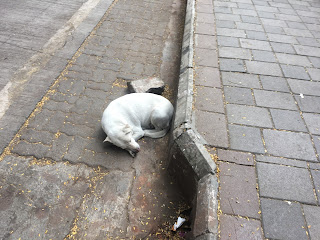 This chap found a place by the roadside which was rather unsafe compared to the other dogs which seemed rather secure in their spaces. However the dangers do not seem to bother the fellow and he curled up, for the time being, only to wake up later when hungry. Lost in dreamland. 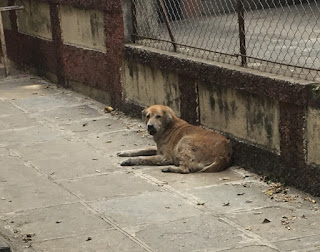 This was the only one who seemed to be mildly alert - an insecure fellow in the world of such secure canines as shown above. Happy bunch.
The dogs grow slimmer as one crosses the market and seem to hunt in packs. Many dog lovers walk by with those poop cleaners which is a hearty sight, and many dogs otherwise leave their poop around. All kinds of dogs are out walking all kinds of owners. I have seen at least four of five dog owners who walk more than two dogs at once and they are also besieged by stray dogs - some five or six - making it one merry crowd of seven or eight.
Anyway, there's something about dog lovers. Sometimes I admire them for their love of animals and life. At times I get the feeling that they distinctly like dogs to humans. Any way D colony is a dog's paradise as one can see and dogs of all kinds are safe and in good hands.

Posted by Harimohan at 1:15 PM