Anjali - Her Poem about her Ajji

This one moved me. It says everything and some more. Well written Anjali. It's beautiful.

The strong, solidity of support

Whose worth no one realized

Until it shut its eyes

Even as she lay at her death bed

Few of many came to pay their respect

While a few toiled and toiled

But this is not their story, mind

The spirit it never died down

As the body went on shutting down

The new teenager cried and cried

In silence, as she had to help

Those in worse situations than herself 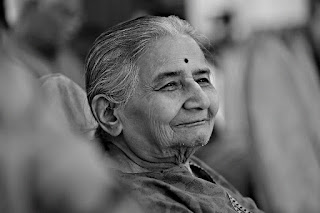 She listened patiently to the stories she previously refused

And had let go of her ego and pride

She fed her spoons of mango icecream

In hopes of coming in her dreams

She had never imagined that the tree, which was always there,

would one day fall in the pit of despair

Even in the time of weakness and pain

She tried to put a smile on her face

She expressed her love through her actions

As she couldn't brave to speak to the mighty

Then one day, there was no tree

To play cards with or ask lovely stories

She initially could not process

That the body in front of her would not wake

To see the dawn of the new day

She didn't seem to understand

Looking so numb and sad

That her last day with her had passed

And the tree had breathed its last

She had never forgotten her face

Full of pride and happiness

When she brought home a medal that hung across her neck

She could not forget these days she spent, holding the one who first held her

But now, what is the use, of wishing she was back on Earth

'She is in a better place' they said

But what if I want her, here, with me?

'Who is your role model ?' they asked her at 9 years old

Now the young teen of today

Weeped in her hands, thinking of the greatest
role model in front of eyes that she had
Posted by Harimohan at 9:59 PM