Pune Diaries - Driving from Hyderabad to Pune After 10 Years

From 2000 or so when I bought my first car, a Santro, Shobhs and I made several road trips to Pune. After 2007, we made many more in our second Santro, Carlos, with Anjali, who considers Carlos her older sibling since he came a month before Anjali into our lives. Sometime around 2010 and after, the Pune-Hyd road was being repaired and it would take pretty long and we shifted to the newly begun Shatabdi train services which were very convenient. Ever since I haven't found the need to drive until the other day when the three of us decided to go to Pune and we thought we'd made an adventure of it and drive down in Carlos. 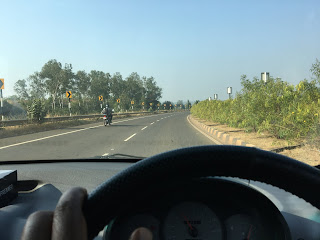 I was worried a bit though. My back was still not fully right and more than that I guess it was my doubting my ability to drive 9 hours at a stretch. I worried about Carlos who is now thirteen years old and hasn't been on a long drive for a while now and shows signs of wear and tear. I got Carlos looked at and there were some glitches with the bonnet etc which we finally fixed an off we were on the 25th. Carlos did cause some concern to Ram and Vardha who offered me their cars but Anjali was steadfast - Carlos and none else. So filled fuel, air and packed off.
We started at 630 am and I decided to keep Carlos at a steady 80 kmph. The weather was good and we made fairly good time past Zaheerabad and Osmanabad and Omerga and Naldurg, munching on sandwiches and stuff. After Sholapur we stopped at Hotel Sunil which was fairly decent but we discovered several more along the road far better. One major improvement is the quality of places to rest. On the other side of the road, closer to Pune, there is a fine Kamat Hotel as well.
The roads were surprisingly good. Except for a 100 kms stretch before Sholapur which is not yet a toll road and which showed some minor signs of wear, the road was pretty good. All the bigger cars zoomed past at 100 plus speeds while I stood rock steady at 80 kmph. The FastTag was a boon as we zipped through tolls - guess we paid some 600 bucks or so. New bridges have been laid, roads four laned, lots of places to stop. FastTag automatically recharged after a few tolls with some 800 bucks.
I noticed a bunch of motorbike riders, some six of them, carrying huge piles of blankets for sale somewhere surely. I saw one truck chassis with a solo driver, unlike the convoy of truck chassis that would be driven by muffler clad drivers of the old days. Not too many trucks and buses but lots of cars with families and friends. The new reality.
Once, I think I dozed off - I could feel it coming on but kept going on - and I veered a bit. Thanks to the guy behind me who honked and woke me up I could wake up. I wished I thanked him for that. All I did was manage a sheepish look. Thanks man.
Sholapur at about 12, a short break for chai and a poori sabzi and off we were on the second leg. The roads were good and four laned and except for the traffic, quite bearable. We hit Pune and headed directly to Gauri's place at Magarpatta. I was pleasantly surprised to see that their home came up in 15 minutes after we entered Pune.
Carlos was brilliant through the trip, riding smoothly as ever. I could not find any difference between the Carlos of ten years ago and now. Thanks to my 80 kmph I think we achieved a mileage in excess of 20 kmpl which is quite something. The tank which normally empties by the time we hit Pune, A 550 km ride, is still at a quarter. Carlos, well done my lad. And Anjali, thanks for your confidence in both my back and my ability and in Carlos. Anjali had a great trip, sleeping through most of it.
Posted by Harimohan at 2:14 PM