Krishna Gubili's debut book 'Viriah' is exactly the sort of a book I would love to see Indian writers write more of. It's a real story and does not shy away from the hard facts of our history. And simply it is real, it will always be better than any amount of flowery and self-deceptive fiction one can write. It is the true story of Krishna's search for his great grandfather's past, faraway in the sugar plantations of South Africa. Krishna's great-grandfather was one among the 1.3 million Indians who were shipped to sugarcane plantations in British colonies as indentured labour and stayed there for over three decades, most of which was not by choice. 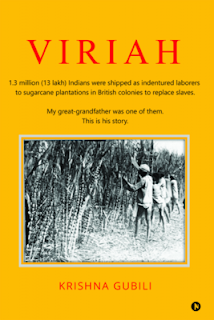 Indentured labour is the way that British colonies invented to circumvent the abolition of slavery, but it was pretty much the same. The famines in India in the late 1800s forced many young men and families to fall to the lure of good money across the seas. Once they signed the papers they were pretty much in the power of their owners and worked in inhuman conditions in the sugar plantations in South Africa.

Krishna begins his story at a time when he was completely unaware of his history - s a child. However, through conversations with his paternal grandmother Nancharamma, he hears about his grandfather Nagoor, an educated sales officer in a paper company based in Vijayawada. (How many of us know of our grandfathers or of our great grandfathers and their histories really?) Through her, he hears of his great-grandfather Veerayya, who lived in Durban, South Africa and returned to India with wealth enough "to build a house with walls of gold". When asked what he did in South Africa she only told him that he was called 'Boiler Sirdar'. Krishna did not know what that was. A letter in the old trunk at home with a South African address, which was more of interest to Krishna for the African stamps for his philately collection than anything else, restarted the story.

That was when his grandmother told him that his grandfather had a sister in South Africa. Krishna's interest is rekindled as he tries to draw a family tree. He wrote to the address in the old South African letter he had found and wonder of wonders, he actually got a reply from his cousin Daniel Naidoo. Pictures, information - and then Daniel stopped writing. Meanwhile, Krishna went to the USA to work.

When he pursued the matter of his great-grandfather with the South African Embassy, he was directed to researchers. One of the researchers said he could not help locate Veerayya because locating records of indentured labour was difficult. That was the first time Krishna heard the term. When he researched what indentured labour Krishna realised that his grandfather had lived in slave-like conditions in South Africa working for British masters in sugarcane plantations. As he read more and more about indentured labour, he was moved by his grand father's plight. For years after that Krishna tried to find some link to his great grand-father. He got ship lists that were released by the South African government and pored through them. But what helped him finally was Facebook (through which my contact with Krishna was renewed too!) through which he located his niece Danae. She replied to a casual enquiry he made and the connection was made.

Krishna went to South Africa to meet his family. After meeting his family he embarked on the search for his great-grandfather again. The description of how he tried to locate details of his great-grandfather from the records in the archives at Pietermaritzburg, on Christmas Eve is wonderful. He finds that the archives are miraculously open till noon that day, rushes through all the records he can, pleads for time, past closing time with people waiting to go for their Christmas vacation, seeks divine intervention, asks the receptionist to hand him anyone last record, finds one which is out of his estimated timeline and guess what, finds Viriah Gubili. It is as breathtaking a moment as any. He has another wonderful experience finding and meeting his aunt Charmaine in an airport for a short while. It's a lovely, heartwarming journey and you feel every bit of the high and low of it as if you were there.

With enough information now, Krishna reconstructs the life of Viriah Gubili (spelt that way in the records - it should have been Veerayya). Viriah's childhood at Korlapadu in Krishna district, his sisters, father Ramaiah and mother Papamma. The dramatic circumstances in which Veerayya leaves home and is recruited by arkatis for indentured labour with tall promises. The terrible conditions at the warehouses as they wait for the ships, the ship journey to South Africa, friends, life and death, disappointment and hard work, romance and marriage, it goes on and on. Over a period of more than a decade at the sugar plantations, Viriah rises to be a boiler sirdar in the sugar mill, has a family of six sons and one daughter. One fine day he decides to leave it all and come back to India. It is a decision that haunts him all his life. One of Viriah's sons is Nagoor, Krishna's grandfather. Based in Hyderabad in India temporarily, Viriah's daughter Chengamma, leaves her family home in dramatic conditions and returns to Africa with her husband. The Boiler Sirdar faces a few more hurdles, buys a farm with his son Nagoor and in the end loses it all. One feels for the man, and for Krishna as he writes passionately and with great feeling about his past.

It is a story that must be read simply because we all are bound to it one way or another. This is our story - an Indian story. The kind of a story that must be told - while we try to hide our histories. And that is Krishna's greatest victory here - he tells the story without any feelings of shame or embarrassment (which most of us do with our histories) and tells it with great love and compassion. Even in the end he talks about the pain of these people, the conditions of workers from India who work in the Middle East in similar conditions, and expresses his helplessness at their lives. I looked the way he ended the story with a poem by Sahir Ludhianvi on the Taj Mahal where he urges his beloved that they should meet elsewhere and not the Taj because it mocks the love of the poor (from a translation of the poem by Ali Hussain Mir, Raza Mir).

The book is similar to 'Roots' and has as much passion and deserves as much attention and love. The other book I read about indentured labour was Amitav Ghosh's 'Sea of Poppies' and  I can categorically say that Krishna's account told me more about the lives of indentured labour, and moved me much more. I could fully identify with every character and visualise every scene. Krishna wrote the story simply and brilliantly and took me on an emotional journey with him. His desire to share the story, to find his past, and through that the past of many of us as well. It is one of the most enjoyable books I have read in a long time and one of the most impactful. I feel it is a great story to be adapted into a film - rarely do we get such stories where everything is perfectly set. I hope some producer picks it up. Also, this is a book that so deserves greater readership so I hope some literary agent or a large publisher picks it up as well.

It is a thorough and meticulous job, a labour of love and I can only compliment Krishna on this fine debut effort. And though Krishna says writing is tiring work, which I know it must have been after a journey of almost three decades, Krishna, you must write more. For all those who love great passionate stories, buy it and read it.
Posted by Harimohan at 4:53 PM

Thanks a ton for the feedback Hari..