Patrick Lafcadio Hearn was a writer and journalist who went to Japan in 1890 from the USA as a Japanese correspondent and settled down there. His books about Japanese legends and ghost stories are his most popular works. His memorial in Matsue town is a popular tourist attraction. The book was a thoughtful gift by someone to Anjali and I could not resist reading the Japanese ghost stories (with an intro by Ruskin Bond who loves a ghost story as much as anyone else!) 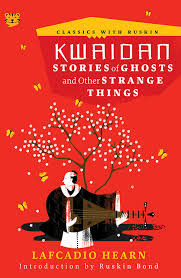 An old man gives up his life for blossoms on a cherry tree, a man meets a faceless woman, a priest is turned into a corpse eater until he is redeemed for his sins, a duck haunts the hunter who shot her companion, a ghost makes a man promise her that he will never reveal her existence and when he does, she disappears, a man is reborn as a small child who recollects exactly enough to reveal his identity and then goes back to his new life and so on.

Lovely short stories each with their own wisdom about life and death. I enjoyed reading the tales and legends that do not seem very different from our own.
Posted by Harimohan at 7:57 PM