'The Fire Burns Blue' is easily one of the better cricket books I have read from Indian cricket writers. It is well researched, addresses an interesting, current and important topic and pretty much covers a part of Indian cricket history about which not much had been written. The one other cricket book of this kind which traced the history of Indian cricket comprehensively was 'The Covers are Off' by the late Rajan Bala which was about the BCCI and Men's cricket in India. The two young authors of 'The Fire Burns Blue' are in good company. 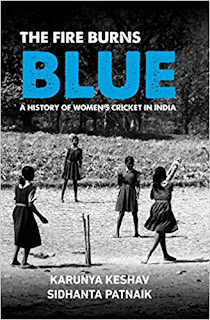 Indian Women's cricket has had a few names that we could remember from as far back as the 80s when we would buy the Sportstar. One remembers Shantha Rangaswamy and Diana Edulji, then we remembered Rajini Venugopal and then the Mithali Raj and Jhulan Goswami, until the World Cup last year when we saw Harmanpreet and the entire team. It was delightful to watch them and their brand of cricket which was so much more cultured than the way the men play. There was a touch of innocence, an amateurishness to the whole affair. The cricket itself was pure, correct and intense.

There is a helpful timeline given at the very beginning of the book that helps us trace how women's cricket grew and I will use a part of it here. In 1971-72 the first women's clubs were set up in Mumbai (Albees. where Diana Eduljee trained, and Indian Gymkhana), Pune (Challengers Club) and Madras (Sky Larks, where Sudha Shah, Fowzieh Khalili and Susan Itticheria played) so one can assume that was the first organised attempt at women's cricket. Sometime after that the WCAI (Women's Cricket Association of India) was set up at Lucknow by Mahender Kumar Shama, who originally organised softball and handball tournaments. The first women's cricket nationals were held in Pune in 1973 where two and a half teams played. Meanwhile, Bangalore had its Falcons Cricket Club (Shanta) and Calcutta had Kalighat Club. The second Nationals were held in Varanasi in December 1973 where Bengal and Tamil Nadu made it to the final. (some interesting stories there!). In 1973 the WCAI also worked to get affiliation to the International Women's Cricket Council in England (through a 19-year-old player, Neeta Telang, who managed it!). This affiliation is what gave WCAI legitimacy over other such bodies. The first Indian women's team was formed to play against Australia Under 25 on their tour of India - the first International. In 1974 the Rani Jahnsi interzonal tournament was begun and in 1975 the first Inter University tournament began in Rajkot, named after Gunamathi Nayudu, wife of CK. Under 15 and Under 19 tournaments were also organised. In 1976 Shantha Rangaswamy scored the first century in an unofficial test against New Zealand. In 1976 Indian women won their first Test match against West Indies at Patna (huge crowds watched that match). 1976-77 the team had its first overseas tour to New Zealand and Shantha scored the first official century (again!). In 1978 India hosted the second edition of the women's World Cup and played ODIs for the first time. In 1986 the team traveled to England, Sandhya Agarwal scored 190. The team missed the 1988 World Cup due to administrative apathy.

In 1993  the team finished fourth in the World Cup in England and in 1995 the team won the Tri-Nation Cup in New Zealand under Purnima Rau. Neetu David took 8 for 53. In 1997 the World Cup held in India, and the team lost in semis. Mithali scored a century on debut in 1999 and in 2002 Mithali made 214 against England. The team made it to final of World Cup and lose to Australia in 2005. In 2006, BCCI took over women's cricket. India made it to the semis of the 2009 World Cup and the semis of the T20 World Cup. In 2015 central contracts are awarded to female cricketers. In 2017 Indians ended up runners up to England in World Cup final. That's te outline of the story.

But the journey started with the WCAI being started by Mahendra Kumar Sharma who supported the cause of women's cricket from the early seventies. With great difficulty, the cash-strapped women's cricket teams managed to play a few games. There were few state games and fewer International games. Travel, safety, money, family, career, marriage all had a role to play in whether the girls pursued the game or not. So from the early days of Shantha Rangaswamy and Diana the WCAI struggled. There were times when there were no matches for years. Rajini Venugopal was one such who lost out for lack of International games for a gap of six years in her prime. Even the records of Shantha etc were reduced because some games were not considered international.

However, the team of Shantha, Diana, Shubhangi Kulkarni, Sudha Shah, Fowzieh Khalili, Arundhati Gosh and others managed to beat West Indies in Patna before a huge crowd. The grounds were bad, hotels shady, funds non-existent and many a time the Secretaries had to shell out from their pockets. Credit to them that no untoward incidents were reported then as they are now. The girls braved it all and did well to stamp their names. When administrators were not doing enough the girls formed a players association and contested and took over and improved their lot. There was an unofficial rebel tour to the USA as well in those days.

The contribution of Indian Railways in promoting the game by offering the girls jobs is massive. All the best players were lapped up the Railways. Then Air India came on the scene and recruited girls. Some amount of security was available for the girl cricketers.

The WCAI approached the BCCI several times to seek a merger but were rejected. when the ICC decided to take women's cricket under its wing, BCCI had to fall in line though it dragged its feet on it and was last to comply. (Srinivasan was quoted as saying that if he had his way there would be no women's cricket at all.) When BCCI finally merged the women's cricket into it, it was the first time the girls saw some comfort. From living in Railway coaches or shady hotels they started flying, living in star hotels, getting contracts it was a huge shift. Today girl cricketers are also offered central annual contracts just as men are. The A grade contracts are 50 lakhs, B grade 20 lakhs and C grade 10 lakhs. Finally, there is some money and recognition for the girls.
The authors met as many cricketers as they could - a long list that includes Shantha Rangaswamy, Diana Edulji, Purnima Rau, Sudha Shah, Shubangi Kulkarni, Mithali, Jhulan and so many more. It delves into selection issues, politics, the recent issues on the coach and so on. I was glad to see the names of Jyoti Prasad (though it is mentioned as Jyoti Prakash), Sampath Kumar, Jyoti Joshi and Pillay from Hyderabad being mentioned. Sampath sir coached us when we were part of the Ranji team and he was fully devoted to the game. In fact, I named the lead character in my novel 'The Men Within' after him.

I wish there had been more stuff on Sandra Braganza of whom we heard a lot when we were young and even Rajini Venugopal. Hyderabad had a lot of cricket for women thanks to Mr. Pillay who Baig sir recalls as taking mats to Women's College Koti and the VPG in autos to make them play matches. Jyoti Joshi, games director of Women's College was equally important. Four colleges played - Women's College. Reddy's College, Vanitha College, Kasturba, and maybe a couple more. Shobha tells me she was in the team for Women's College then which was led by Purnima Rau and they would play matches at Women's College and at the Victoria Play Ground. Baig sir's name is not mentioned but he recalls coaching the girls in Victoria Play Ground and lauded the work done by Pillay and Jyoti Joshi.

The book covered issues like sexual harassment and did not balk form naming the parties involved. The good work done by Anurag Thakur of HPCA in constructing a residential hostel for girl cricketers of Himachal Pradesh and also the good work done by Andhra Cricket Association which encouraged women's cricket right from the days of Mr. Venkat Rao are listed.

It is a well researched and thorough job and the authors must be complimented on such a sincere effort. It is well written too, spicing up the narrative with references to literary works or sporting, movie or historical examples and does not bore you with statistical details. The way they began with the story of triple international Shireen Kiash who played for India in cricket, basketball and hockey set the tone perfectly - we would never have known of her but for this book. The authors take a position about women and their role in society across ages. They quote Virginia Woolf. The narrative flies and very early in the book you start rooting for the girls and want them to do well against all odds. Prime Minister Indira Gandhi was a big supporter and helped the early teams. There is a picture of the women's team with Prime Minister Rajiv Gandhi as well.

I personally prefer watching the women's brand of cricket these days just for the fact that it does not have the 'arrogance' as some coaches put it, that the men have. There is a way cricket has to be played and they play it that way. So for me, the book could not have come at a better time.

Karunaya Keshav and Sidhanta Patnaik, great job. This is one book for the collection. Impressive debut and I hope to see many more from them.
Posted by Harimohan at 11:04 AM