This is a lovely gift from Abhinay complete with a nice message to me. This is also the third or fourth book he has gifted me - all diverse and eclectic in content. Vinay Sitapati's book on P.V. Narasimha Rao, former Prime Minister of India appears to have received wide critical acclaim with the Economist calling it 'The book of the year' and the Times of India calling Vinay 'the new rock star historian;. Vinay has a PhD in politics from Princeton University and has degrees from National Law School Bangalore and from Harvard. He is an Associate Professor who teaches Political Science and Legal studies at Ashoka University.

The book starts with the way PVNR was treated after his death on December 23, 2004, with Congress leaders persuading the family to cremate him in Hyderabad and not Delhi, refusing his body access to the Congress Bhavan and other such unpleasant politics over his death. the finger points clearly at Sonia Gandhi with whom PVNR did not share a great relationship after he was made Prime Minister. In the end, it was in Hyderabad, near the Tank Bund that his final rites were done, and Vinay actually ends up saying that his body was left half burnt (which is the title of the first chapter). It's rather dramatic but it serves its purpose - the former PM was not wanted in Delhi by the Congress by that stage. 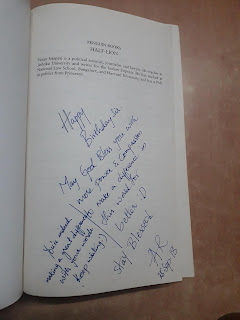 Coming from a Brahmin family in Nizam ruled Vangara, in Karim Nagar district PVNR showed an exceptional penchant to learn. His father who was a landowner decided that PV was better off studying and he was sent to another village when he was five to study. The separation seemed to have a traumatic effect on young PV. He was adopted by his rich neighbour who owned some 1000 acres of land and was worried that it might be taken away by the Nizam. PV was debarred from college in Warangal when he and in college mates sang Vande Mataram against orders to stop and were expelled. This was in 1938, Rao was seventeen. He went to Nagpur to complete his degree then went to Pune to study astronomy. He went and studied law in Nagpur and then joined B Ramakrishna Rao, a lawyer in Hyderabad. Married pretty early to Satyamma, he sired eight children with her, but left her to handle the children as well as the lands while he studied and went about with his life and politics.

Rao was influenced by the nationalist leader Swami Ramananda Tirtha, President of Hyderabad State Congress who wanted the lands owned by the middlemen to be transferred to the tillers and make for a socialist society. His other mentor was B. Ramakrishna and he was made the president of Karimnagar district Congress and lost the election in 1952. In 1957 he won the election from Manthani. In 1956 when Andhra was carved from the Madras state there were demands for a separate Telangana. Rao became a minister in the state cabinet. He was in a relationship with one Lakshmi Kantamma, wife of a Forest Officer, who was elected to the Parliament. Rao never let his family close to the politics. He was also never interested in politics - he wanted to be an academic.

In 1971 he was made Chief Minister by Indira Gandhi. He was firm in enforcing his ideas of land reforms which were not very popular. However, the 'Jai Andhra' movement in 1972, which was an offshoot of the mulki judgment, cost him his Chief Ministership. He quietly acquiesced and stepped back. Then he became the General Secretary of the Congress Party. He saw the Emergency through and lived to see the return of Indira Gandhi the Blue Star Operation and the subsequent assassination of Indira Gandhi. All through, PV was seen as a man who would not trouble anyone, his demeanour, his quiet and perhaps even his stature made people feel secure with him. There is no reason why he got so many posts without high ambition. In 1970 his wife died. In Delhi he was friendly with a journalist Kalyani Shankar - romantically or no - it's not clear.

He served as Foreign Minister in Rajiv Gandhi's cabinet - at a time when Rajiv was trying to get rid of all the older people in the party and getting his own friends and 'yes' men into the party. There is an instance of how one of his friends makes PV put his foot down - a lesson in manners to the sixty plus politician - something he never forgot. When he became PM he banished them all. At the time of Rajiv Gandhi's assassination, he was all set to retire. He had sent his books back to Hyderabad and even taken up monkhood at a pitham in South India. Rajiv Gandhi's death opened up a new avenue for him and PV seemed to have played his cards well and somehow managed to become a PM in a minority-led government and at a stage when he was forced to make reforms. He picked his people well, Manmohan Singh was one of them, and went ahead with the reforms that pulled India out of economic crises. In those years he also faced the Babri masjid crises and started the nuclear program despite pressure from the US. He started selling India as am economy for foreigners to invest in, would take businessmen along with him to improve trade.

All through he was politically not very strong and survived by the skin of his teeth. He believed in godmen, Chandraswami and Sharma, had his private relations with women like Lakshmi Kantamma and Kalyani Shankar which he did not hide from anyone, went everywhere with his cook Rajaiah, read thousands of books and made detailed notes, mastered the computer and learned two languages. He wrote and translated books, tried his hand at fiction. He would read books by the dozen and would write notes of appreciation to the authors - Sitapati mentions a note to Arundhati Roy and her reply to him.

PV was a contradiction, a man thrust into the position of power without him wanting it. He would have been happier in a college just as Manmohan Singh might have been but they did bring their own brand of leadership and achieved much quietly. The Babri case was one where he was said not to have done anything - Sitapati devotes an entire chapter to it and it appears that PV tried to get parties together through backchannel talks, made errors in judgment about people and felt betrayed when the mosque was brought down. Despite the best of intentions, people are judged by the outcomes and PV will have to bear the cross. PV, right from his days as Chief Minister in Andhra, had a way of isolating himself by choosing a course of action in conflict with his mentors or his colleagues - land reforms in Andhra, hawala cases against his colleagues when PM, sidelining Rajiv Gandhi's friends and perhaps even ignoring Sonia Gandhi, overestimating his judgment and underestimating VHP and Shiv Sena and even Arjun Singh, these seemed to be some of his faults. That he did what he felt was right was pretty clear.

Small incidents give his character away. The way he takes apart a malfunctioning water pump and repairs it, the way he figures a way to get better yields from cotton, the way he learns ten languages and computers, and pretty much anything he sets his mind to are interesting. He was not one to worry about credit long as the job was done as in the case of the nuclear program (Vajpayee completed the job) and the economic reforms (he attributed that to Rajiv Gandhi). A weakness for women is one of his faults, it says.

An interesting book. Thanks Abhinay.

Posted by Harimohan at 2:54 PM