I Am Not a Crook - Art Buchwald

It's a full book of columns that Art Buchwald wrote about Nixon and his bumbling Watergate gang and by the end of it, you know the entire story and some. In fact, Art dedicates this book to Richard Nixon. John Dean, someone called Stancy, Eldeman, Ehrlichman, Ron Ziegler, Charles Colson and his grandmother, Kissinger and his wife Nancy..and almost everyone even remotely connected with the White House. One column has two people working in the White House talking to one another, another where the White House is talking, plumbers, psychiatrists, George Washington, the tapes...so much so that you wonder if any angle has been left alone. 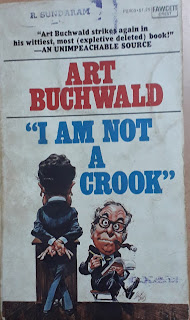 As always, Art Buchwald's columns leave you laughing out loud. One piece was exceptional because it drew more than one laugh. It's where a second-hand car sales showroom decides to bug its prospective customers so they get to know what the customers are talking about when the salesman is not around so they can better address their needs. It's hilarious.

Raja gave this lovely used book - owned by one R.Sundaram (and signed by him too) when I told him I now desired to collect as many funny books as I could to make my life more full of fun and laughter. He also gave me a Dave Barry book which I am yet to read.

Thanks Raja. And more importantly, thanks Art Buchwald. There was a time when as a youngster I used to read his column in the Hindu and it would make me laugh even then without having a clue about politics in America. When I wrote a column for the first time for the New Indian Express I secretly told myself that I would try to write like Art.
Posted by Harimohan at 11:33 PM