1983-84
Rummaging through the tapes, I found this old one of Sylvester Stallone's 'Rocky'. I first heard of the 'Eye of the Tiger' from Naresh who told me about this fabulous song by a new group called Survivor which he heard at a New Year's Party. I had not yet heard about 'Rocky' series or even if I did, was not a big fan.

So when Mani (aka Satyanath) my neighbour showed me his cassette and gave it to me, I took it home and listened to it over and over again. 'Eye of the Tiger' was brilliant but so were 'Take you back' and 'Pushin' and the overall theme music. Now when I opened it I found Mani's signature on it. So I caught him the other day when he was walking the dog, showed him his old tape and took a picture of us with it. 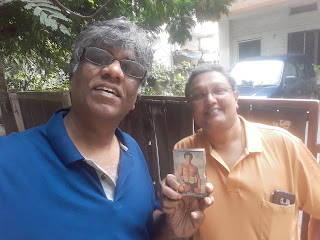 'Eye of the Tiger' gave us many hours of pleasure in parties. My friends who were also boxers - Madhav, Vardha, Ranjan, Choudary (the last three only rained with them) - were big fans and they would imitate Stallone and his stuff. And of course show off their budding or non-existent biceps. 'Eye of the Tiger' certainly inspired many in the gym those days. Survivor however never had another big hit if i remember right.
Posted by Harimohan at 4:56 PM