A upright and rule-bound election officer tries his best to conduct a fair and proper election in the naxal infected forest area of Chattisgarh. He is protected by police and the military, none of whom want to be around in the godforsaken place any longer they can help it  because there is a threat of an attack. Also the tribals don't seem to care anyway who wins and who loses. But Newton (an improvisation of Nutan) has other ideas. 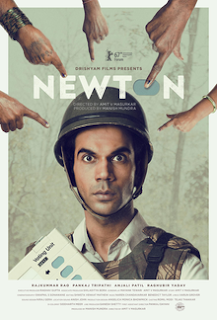 It is a nice, honest film and it gave an insight on how elections are conducted and how much pressure there is on young officers trying to do their duty despite the many obstacles they face. It's slow, linear and works on expected lines. But then it is honest and entertaining. This is Amit Masurkar's second film (he dropped out of Manipal Engineering College to pursue film making)and it was India's nomination for the Oscar's in the Best Foreign Film.

Raj Kumar Rao is as usual very dependable and the rest of the cast perfect. The highly dependable Sanjay Tripathi plays the cop in charge (his story is equally fascinating - a farmer's son who worked n his farm and who discontinued after the 11th, played the role of girls in festivals, moved to Patna to pursue studies then Delhi and National School of Drama) - he can play the cold blooded butcher in Gangs of Wasseypur and the gentle station master in Masaan.
Posted by Harimohan at 4:09 PM