The 1979 Francis Ford Coppola's anti-war movie is over 3 hours long and stretches languorously across the time frame. We follow a US captain Willard (Martin Sheen) who has been given the job of terminating renegade Colonel Kurtz (Marlon Brando) of the US Army who is believed to have gone insane and who is running his own private empire. The film travels up the river in a boat and shows the Vietnam war and its horrors and realities as we go upward to Cambodia where Kurtz presides. Along the way we meet all kinds of people and see all sorts of sights. 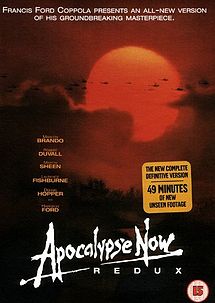 The boat assigned to the classified mission is commanded by the diligent and rule bound Chief and he has his helpers Mr. Clean and Chef. They are joined by the surfer Lance who is on dope. Clearly every single outpost shows US soldiers at the end of their tether and wanting to go home. They are surprised to find the boat heading the other way - up to Cambodia. A napalm attack, then Clean dies in another attack, then Chief dies and finally the boat with Willard, Chief and Lance arrives at Kurtz's location. It is full of bodies, hung on trees, spaced out young soldiers. Willard meets Kurtz, (who is hidden in shadows and I understood why only after I read that Brando showed up overweight while he was a green beret colonel)  who is clearly insane and in an anti climax kills him pretty easily and walks away through the throng of hundreds of Kurtz's supporters - perhaps as the new king.

Kurtz recalls a memory, of little children who are inoculated, and whose inoculated arms are cut off by the army, which causes a deep horror and perhaps the unhinging of an otherwise intellectual mind. It ends with those words..horror..horror.

Sheen is intense. Brando is a let down. Harrison Ford appears in a short cameo in the beginning. George Lucas was supposed to direct the film but he dropped it to direct Star Wars.

It's the kind of a movie that makes sense to the people in the arena, the pointlessness of the war, the brutality and like Krutz says, the horror. The movie itself was a product of many difficulties - a set being burnt, Sheen almost dying of a heart attack on location and Coppola's editing of the 1.5 million feet that he shot that postponed the release because he had so much material to edit from. Coppola himself invested 30 mn into the movie, used tracks by his pals the Doors in the movie, suffered seizure, breakdown and threatened suicide, and pretty much faced ruin. Something has to be sacrificed while making a masterpiece.
Posted by Harimohan at 4:52 PM