She likes her crackers and sparklers for sure. In fact the past few years she did make it a point to go with her mother to buy herself sparklers and stuff and certainly enjoyed the idea of lighting diyas followed by the crackers. But this year there seems to be some talk at school about 'No crackers' and 'only lamps' and 'no pollution' so she decided against crackers and instant gratification - and put off her pleasure for the greater good. 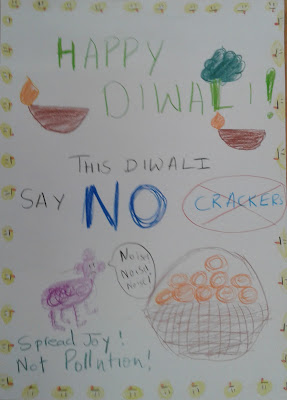 Even the fireworks she had from last year, of which she lit a couple of sparklers, she gave away.

Then she made a poster which she wanted to put up in our community hall. I was told to go with her and she would do the talking. Well one thing led to another and we could not make that trip but the poster stared at me grimly.

We got an invite from Naresh to visit his house so we can have dinner and burst a few crackers. He asked - what crackers does Anjali like? I asked her if she would like to go to his house and burst firecrackers. She said - no crackers. We can go for dinner. I told Naresh that and he laughed and said that's wonderful. Join me for dinner,
Half an hour later I get a message. 'Anjali inspired me to give up crackers too. No crackers this evening.' What's more? He put up a post on fb saying that he was inspired by her to give up crackers - and got many people interested in that chain. It certainly moved places from one sincere thought.

I am amazed at how one can make a change by just being the change themselves. Wonderful.

I was speaking to my friend Vardha and told him this story and he said that his two sons Yash and Varun have also stipulated the same rule at home. They do not burst crackers.

Great work by these schools, teachers and the kids. One house at a time, one idea at a time. That's how we change the world. There will be about 5000 bucks worth of crackers less this year from what I know.

It's also the kind of a Diwali I enjoy. Beautifully lit. Serene. Peaceful. Way to go Anjali, Varun and Yash (in alphabetical order).
Posted by Harimohan at 12:40 PM