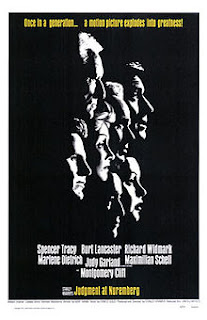 The movie focusses on the trails of four judges (fictionalised) in the backdrop of what happened and brings about issues of justice, conscience, guilt and behavior and examines the thin line between what is considered duty and what is right. It is long but you never feel the length.

Judge Haywood arrives in Nuremberg to head the Tribunal that will hear the judges case. The prosecution is trying to make a case that the judges, though they had only sentenced a few people to death or other punishments, were also responsible for the holocaust which killed 6 million Jews. The defence tries to prove that the judges were only acting as per the law of the land and if they did not act as per the aw they would be ailing in their duty. The cases are about forced sterilization, racial purity killings and such. It is extremely delicate. Both lawyers take aggressive and tight stances.

The first case about a sterilisation case is successfully pulled down by the defence which kind of proves that the witness was not sound of mind and therefore as per the law in order, he had to be sterilised. The Feldstein case of racial purification is then brought up - and the prosecution manages to bring Ms. Hoffman to the stand. She clarifies that Mr. Feldstein had been like a father to her and very kind and no sexual relations existed between her and him. While defence tries to beat her down and break her with details of her so called affair, Ernst Janning, one of the accused and one who is much respected and of high position, roars and asks - Herr Rolfe, are we going to do it again? Meaning, are we going to subject her to injustice and indignity again. Burt Lancaster is fascinating to watch as the fallen hero atoning for his past sins. The case turns on his statement that he had already decided the punishment for Feldstein even before hearing the case and had sentenced him to death which was in line with popular opinion then.

In an interesting scene where the four accused are eating together they discuss the prosecution's tactics of showing graphic images of the holocaust to cast blame on these four. How could we have killed millions they ask each other. Then they ask Pohl, another inmate, and one who was in charge of a concentration camp if it was possible. It is, says Pohl, two chambers with poison gas can kill 10000 in half hour. And they could do that without guards. The problem was not the killing he explains, it was about disposing the bodies. The four men sit back in silence.

Judge Haywood finds all four guilty and sentences them to life imprisonment. Janning asks to speak to him before he leaves and tries to explain that he never thought it would come to what finally happened. But Judge Haywood puts it in perspective and tells him that the day he sentenced an innocent man to death he had started the process.

Fabulous movie. Can watch it any number of times despite the three hour length. I fact I watched a rerun for a second time to hear some dialogues and watch some scenes again. I need to read about the other trials. The movie presents both perspectives strongly - that Germans were not all as bad as they were made out to be, that most did not know what was happening, that they believed they were doing their country a service. Highly recommended.
Posted by Harimohan at 11:40 PM